by World Memon Organisation on 8 November 2014

The 12th AGAM of the WMO and the 12th AGM of WMO CF was hosted by the Africa Chapter in the resplendent city of Johannesburg, South Africa on 7th and 8th Nov 2014 at the Sandston Convention Center

It was a celebration of Memon brotherhood and a watershed event in the history of WMO. The grandeur and scale of the proceedings were previously unmatched. The warm camaraderie, fellowship and affiliation of all Memon’s around the globe towards this wonderful organization were strikingly evident by the colossal turn out at the event.

There were large representations from India, Pakistan, Sri Lanka, Middle East, America, England and of course the home continent of Africa.

The AGAM endorsed WMO as the truly global, umbrella organization which unites all Memon’s under its wings.

The most noteworthy development of the 12th AGM was the Merger of WMO and WMO CF into one Organization. It was the outcome of eighteen months of hard work, discussion, deliberation and conclusion arrived at by the Governance Committee. The Committee was appointed in February 2013 at Colombo under the capable leadership of Mr. Yunus Suleman.

6th November marked the arrival of most of the delegates from around the globe and signaled the start of a momentous AGAM which was the culmination of three months of rigorous planning and hard work by the African contingent. Notably Mr. Feizul Ayob, Yunus Suleman, Haroon Joosub, Haroon Gutta, Fazila Ismail, Sherbanu Ayob, Moosa Carrim and many others.

The majestic Turkish Masjid was a sight to behold as the delegates were taken to perform Maghreb Salah at this most magnificent monument. Next was a tour of priceless artifacts on the mosque premises and dinner at the adjoining restaurant. The food was delectable and the ambience was made ever more romantic with the candle light dinner. Truly fine dining experience. 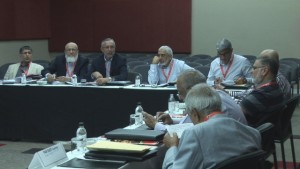 The Governance Committee met in the morning to put the final touches to months of consultations, deliberations and arrived at a consensus to present the final proposal for the Merger of the 2 institutions and formulation of the new constitution.

The Gov Com meeting was followed by the WMO CF Board of Trustee Meeting presided over by Chairman WMO CF Mr. Suleiman Noor Mohamed (Solly Noor).

Zakath Collections, Zakath Disbursement, Trustee Fee Shortfalls, Investment update, the Merger and adoption of the new constitution were predominant discussions of the meeting. A very encouraging sign was the improvement of the overall management of WMO properties in Dubai and the marked increase in revenue from these investments

Jummah Salah was conducted by Maulana Nabeel at the same venue and a scrumptious buffet lunch was laid out for the delegates. 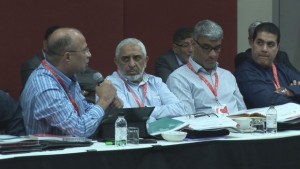 This was followed with The Board of Management Meeting of the WMO chaired by WMO President Mr. Abdul Satar Dada. This part of the BOM meeting was devoted to the Presentation of Regional Chapter Reports by the respective Vice Presidents.

The dinner was at the Killarney Country Club. The selection of venues and the mouth watering cuisine epitomized the unmistakable effort and planning made by our magnanimous hosts towards making this trip so memorable.

The articulate Mr. Feizul Ayob took the mike and started off proceedings. There was an eloquent rendering of a Qirat from the holy Quran. The food was top-notch and was only surpassed by the desserts. The entertainment quota of the evening was raised substantially by the newest trustee Mr. Haroon Bha of Malawi who had the crowd in splits thanks to his innumerable, witty jokes in the preferred Memoni language.

Day 2 – 8th Nov 2014
The morning session began with the continuation of the BOM meeting. The predominant agenda was Audited Accounts, Zakath Disbursement, Election Report and Constitution Amendments. Solly Noor Bha in his customary fashion and zeal upped the figure of the Zakath Commitment to a target of US$ 4.0M. It was agreed as below. This was followed by a Special Vote of Thanks from the House to Satar and Solly Bha for their dynamic leadership in getting these commitments

The house gave the outgoing President Mr. Abdul Satar Dada a Standing Ovation for the leadership provided to WMO in the past 4 years and leading the organization in an exemplary manner with devotion, commitment, vision and humility.

After another hearty lunch, the WMO AGAM was inaugurated at 2.30PM where the special resolution was unanimously passed by the house agreeing to the Merger proposed by the Gov Com and was followed by the adoption of the Election Commissioners report for the regional Chapter elections for 2014 to 2017.The following Vice Presidents and Asst Sec Generals for the regions were confirmed

The WMO AGAM was followed by the WMO CF AGM. The main item on the Agenda was the Special Resolution for the merger of WMO and WMO CF and the adoption of the new constitution of the WMO.

5 New Trustees coming on board was a fitting endorsement of the progress made by the WMO in the past few years.

With the approval of the new constitution, the WMO CF AGM was concluded and this was followed by the 1st Meeting of the Management Committee appointed under the new constitution. Sir Iqbal Sacranie’’ was unanimously proposed by the house to act as the Pro Term Chairman to elect the Office bearers of the Management Committee and the following Office Bearers of the WMO CF were thereafter elected to lead the organization for a 3 year period starting the 12th AGM 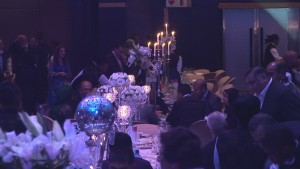 The crème de la crème of the South African Memon community joined the overseas delegates for the grand Gala Dinner at the Sandston Convention center. This was the confluence of culture, wealth and power. Ministers, dignitaries, prominent industrialists, successful businessmen, distinguished socialite’s rubbed shoulders with each other as they enjoyed the now customary excellent food palate.

The highlight of the evening was the conferring of “WMO Awards” given by the Africa Chapter to some off the leading Muslim Business Leaders in Southern Africa for their contribution to the Economy of South Africa, to Mr. Abdul Satar Dada, President WMO and Mr. Suleiman Noor Mohamed (Solly Noor), Chairman WMO CF for their service to WMO and to Mr. Aboo Tayob and Mr. Kadar Kalla for contribution towards Memon Communities over the years 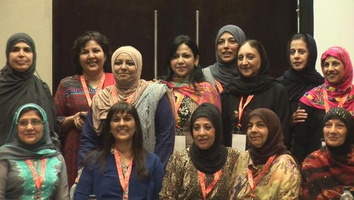 The International Ladies wing under Chairperson Mdm Hawa Abdullah of Pakistan met on 7th Nov on the sidelines of the main WMO Meetings to discuss their progress in the past 1 year, share ideas and experiences and chart a new course of action for the future. With the participation of over 25 overseas ladies and equal number of local ladies this was the largest gathering of the International Ladies Wing since its inception. The main focus of the discussion was “Memon Connection”, with many ideas being shared to make this service accessible to a wider audience of Memon’s from across the world and make the networking of families more effective through a robust program in the future. The proposal by Middle East Chapter to create a separate website for MC was approved during this meeting

Day 1
The day began with a lecture by Mj Khan on the importance of social media. Arsalan took the lead in highlighting the work done by the previous International Youth Wing Committee. The youth were taken to the Turkish Masjid for the Jummah prayers following up with a trip to Lion’s Park and had further brainstorming session alongside delicious braai, to finalize the events for the next term.

Day 2
The day began with a lecture given by Dr. Ridwan Mia. The rest of the day was utilized to develop a blueprint going forward for the next term. A lot of ideas were shared by the participants and an open discussion was held to help devise a proper strategy. Each chapter was given time to showcase their work previously done and future plans were also shared.

Projects/suggestions lined up for the future were

In addition to this, the following youth were unanimously selected to lead the IYW for the New Term

Mr. Solly Noor graciously invited all the delegates to Cape Town after the AGAM. The lucky few who took the invitation were spoilt rotten by Farzana Mahomed, Solly bha’s daughter. From hotel reservations, airport pickups, transportation to final drop offs. All went like clockwork and attention was given to every little detail to make the guests comfortable.

The daily tours to marvelous destination, the picturesque journey and enjoyable picnics were thoughtfully planned and executed by Farzana. Solly Bha and his better half the wonderful Zohra bai took out precious time from their busy schedules to join the delegates on these tours and catered to their every need.

The alluring Table Top Mountain, the pristine beaches, the gorgeous vineyards and the awe inspiring waterfront harbour overlooking the Solly residence should be on the bucket list of every individual.

Cape Town is known as the Sea food Capital of the World. From the jumbo sized prawns, the succulent lobsters or the exotic Cray fish. Solly Noor Bha hosted dinners at the finest restaurants of Cape town. The world famous Baya, Taj or his majestic residence were venues where all delegates enjoyed the most delectable cuisines

Thank you South Africa. For the wonderful sights, warm hospitality, endearing hosts and the unforgettable memories. You will be missed.