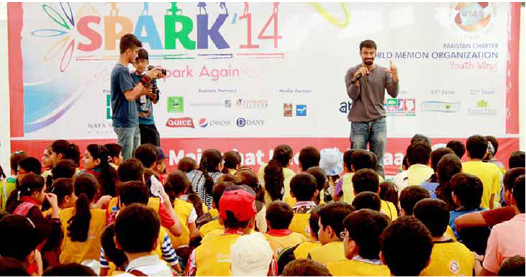 The Youth Wing of the Pakistan chapter organised Spark’14. This was the second consecutive year that the event had been organised and it was a massive success. Spark’14 was a 4 day event, targeting kids between the ages of 10 to 15. It is an excellent platform to teach kids many important life skills, to boost their self-confidence and to explore their hidden skills and talents. Among others, the children learnt leadership skills, communication skills and team work.

Spark’14 was executed with a great amount of planning.  Each of the four days had a different theme.

IT IS AN EXCELLENT PLATFORM TO TEACH KIDS MANY IMPORTANT LIFE SKILLS, TO BOOST THEIR SELF-CONFIDENCE AND TO EXPLORE THEIR HIDDEN SKILLS AND TALENTS. AMONG OTHERS, THE CHILDREN LEARNT LEADERSHIP SKILLS, COMMUNICATION SKILLS AND TEAM WORK 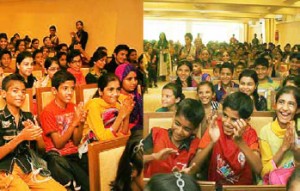 The theme for day one was “Tum May Kuch Hai Khaas” (“There is something special in you”). The venue for the first day was the Jade Banquet Hall at The Arena, Karachi. After an introductory talk by Altaf Ahmed Vayani, Chairman of the Youth Wing of Pakistan Chapter; the children were divided into three teams and different coloured jackets were distributed among them. Ice-breakers, Energisers and introductions were held within the team.

The first session was conducted by Zohair Alibhoy. He narrated various stories to boost their self-confidence and through which; they were taught lessons of forgiveness, honesty, respect, honour, cleanliness, etc. The first half of the day was filled with a number of team building activities followed by lunch. After lunch, the students moved to the gaming zone to enjoy a well deserved break. Many games were played; such as bowling, indoor rock climbing, indoor cricket, pool, ice skating, etc., and the kids had an amazing time.

The theme for day two was “Muskurahatein Baanto” (“Share the Smiles”). The second day was divided between two venues. The First venue was Naya Nizamabad. Here, the children enjoyed hiking and horse riding, followed by other team games such as tug of war and Frisbee.

A TEAM FROM TOFFEE TV WAS PRESENT THERE TO ENGAGE THE CHILDREN WITH STORIES AND SONGS. MANY POEMS AND SONGS WERE SUNG WITH A GUITAR ACCOMPANIMENT

After this, everyone moved to the second venue for the day: the Nizamabad Homeopathic Hospital. Here, the children were treated with an amazing lunch. A team from Toffee TV was present there to engage the children with stories and songs. Many poems and songs were sung with a guitar accompaniment. To make it more fun, some of the poems were also translated to Memoni. Day two ended with fun and laughter. The children came home with the message of team work and learnt to be confident and enjoy life.

The theme for day three was “Jeeyo Jee Jaan Se” (“Live life to the fullest”) and the venue for day was the Dream World Family Resort. It was a very exciting venue with the children looking forward to all the rides. The day started with a session conducted by Hammad Riaz, the youngest trainer. His session was very energetic and he taught the children to live and enjoy their life to the fullest and to face obstacles in life with a positive attitude. This was followed by a session conducted by Sarwat Usman. She gave them a lesson on being a responsible citizen and a good human being. Lunch was served soon afterwards. Post lunch, the children enjoyed themselves in the swimming pool, wave pool and immersed themselves in activities such as boating, archery, horse riding, snooker, etc.; while the CEC team and the various WMO volunteers kept an eye on them. The children enjoyed themselves thoroughly with these activities. 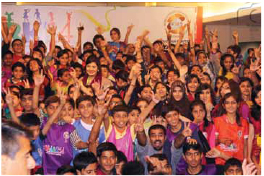 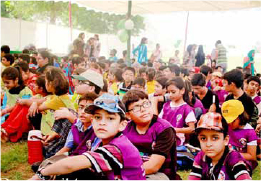 The theme for day four was “Kal Ke Liye Aaj Socho” (“Plan for Tomorrow”). The intention behind this theme was to encourage the young to plan ahead in their life and to be ambitious; to find their calling and to think of their future and the future of the people around them. Muhammad Jawad Choksi started the day with an interactive session with the children where he quizzed them about the previous three days. Participating students were awarded candies and chocolates. All the children received these sweets. After high tea, there was another interactive session by Hussain Aftab Changi where they learnt that change in the society is difficult to be affected by a lone individual, but together, it is easy. Arsalan Larik conducted a talk where he taught them the importance of communicating openly and honestly and to speak their mind. He emphasised on the fact that we have to start taking initiatives. If we do not speak up, show up and come up, no one will do it for us.

During the last day, the parents were also invited. While the children were busy in their activities, Arsalan Larik conducted a session with the parents. In the interaction, the parents were very curious and expressed and discussed their concern about all issues or confusion that they had faced with their children.

As the activity-filled day came to an end, the WMO Youth Wing received compliments and praises from the parents for establishing such an excellent platform for children to learn and to express themselves. The closing ceremony was initiated with the chief guest, Shoaib Ismail Mangoria (the Vice President of WMO Pakistan), addressing the audience. Then, all the winners of the various events were announced and awarded sashes and crowns. The Speakers were also given mementos for their participation and hard work in making the event possible. The Spark’14 was a fantastic learning experience for the children, parents and for the speakers alike; with many memories to cherish.