by World Memon Organisation on 2 October 2018

WMO South India Chapter, under the able leadership of it’s VP - Mr. H.E. Abdul Azeez and Mr. Adil Azeez (Regional Secretary General) organised a mass marriage ceremony for eight underprivileged Muslim couples at the plush Adam’s Heritage in Benson Town of Bengaluru on a scale and grandeur that were yet unheard of. 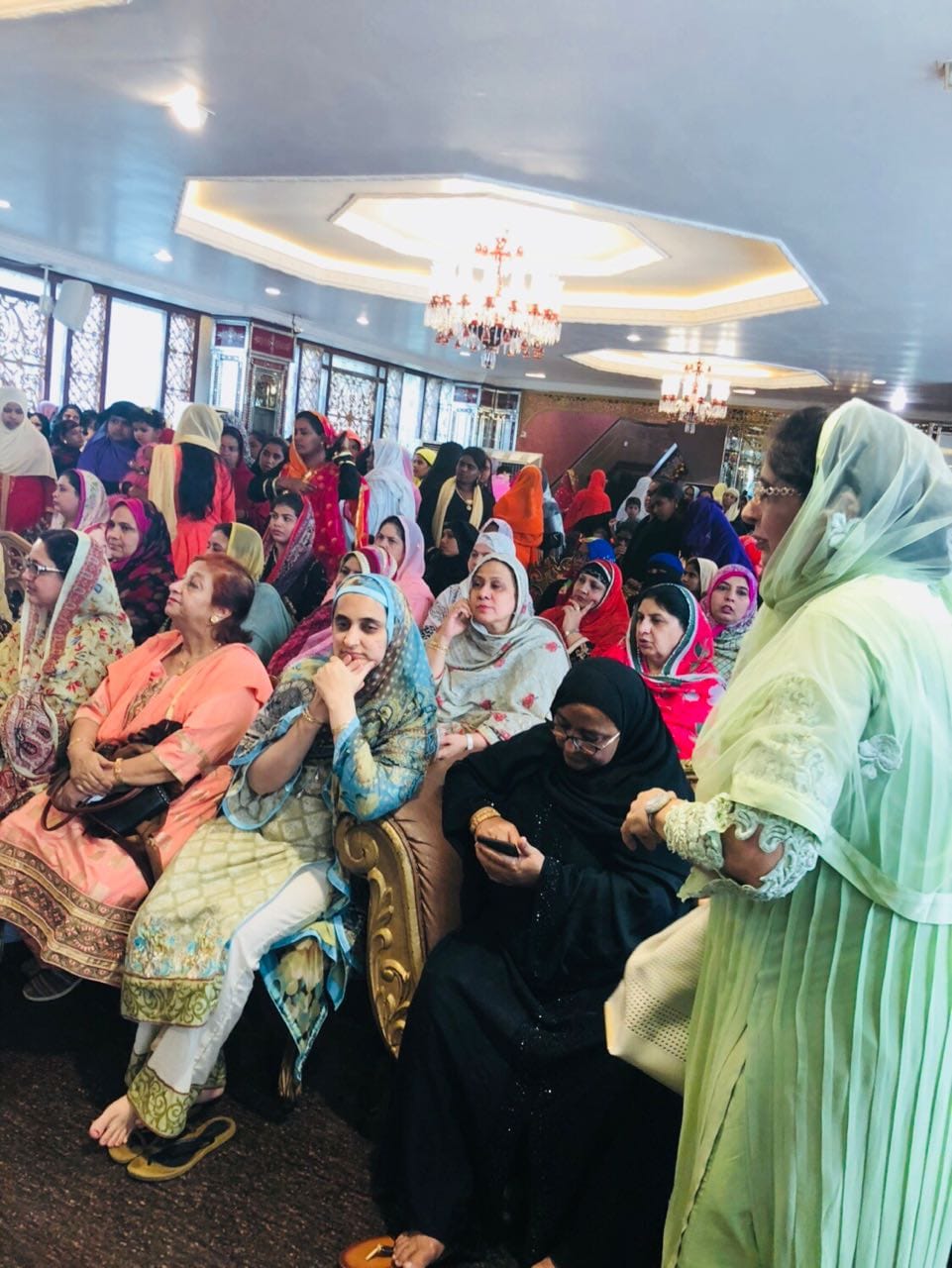 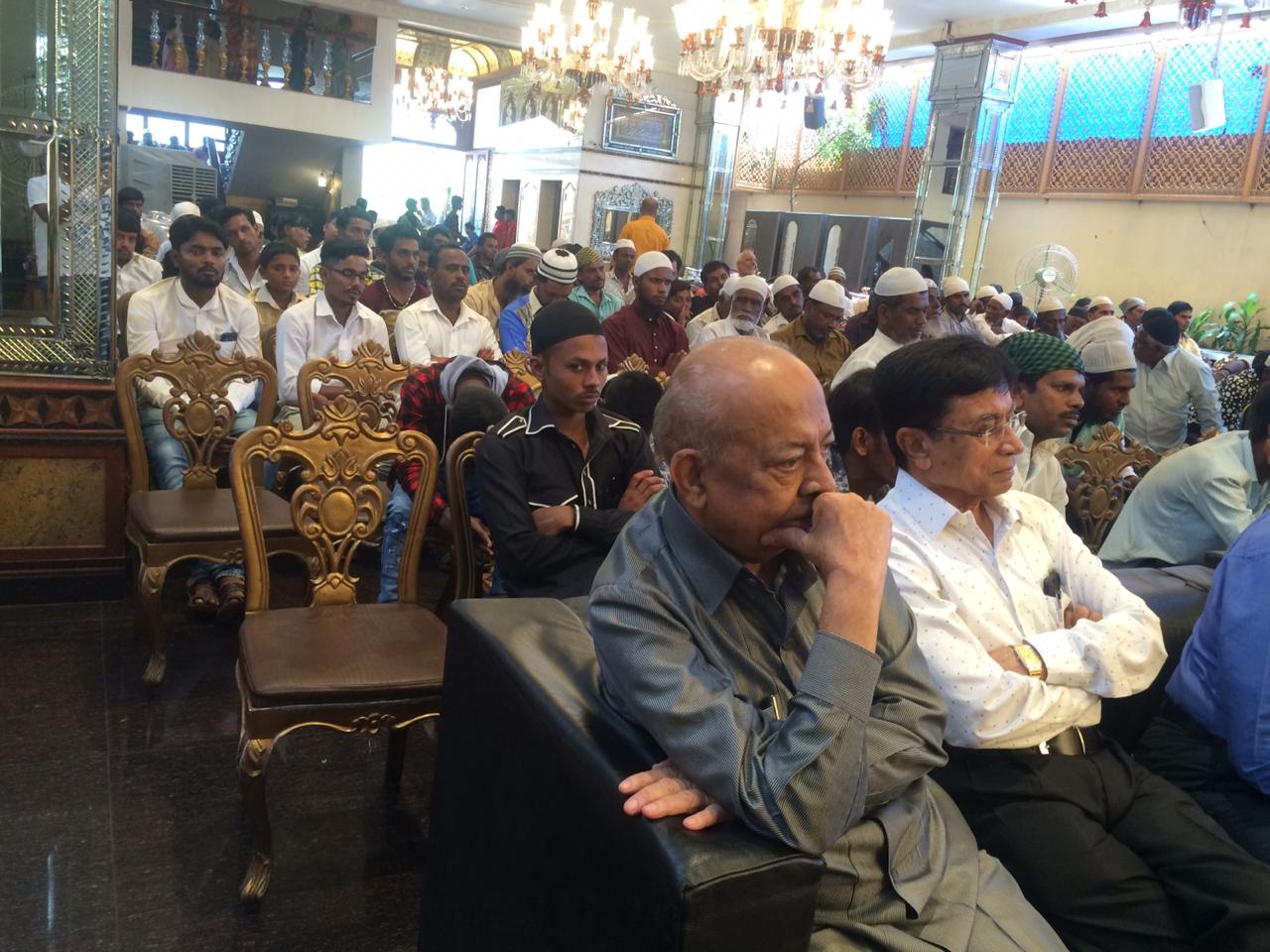 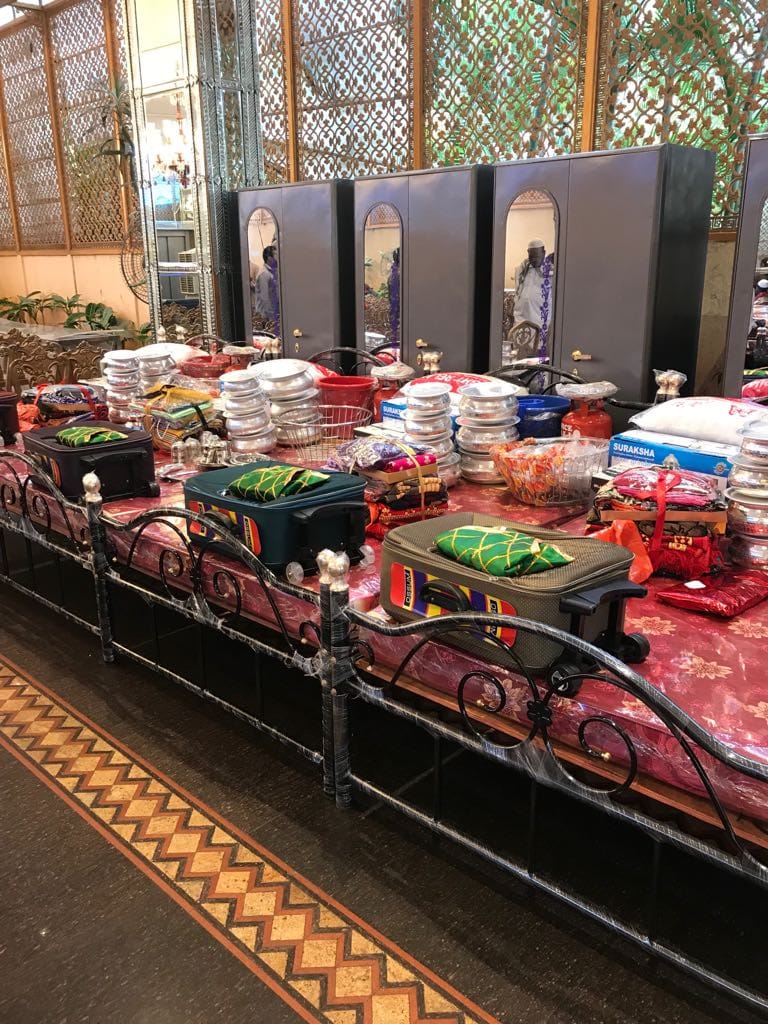 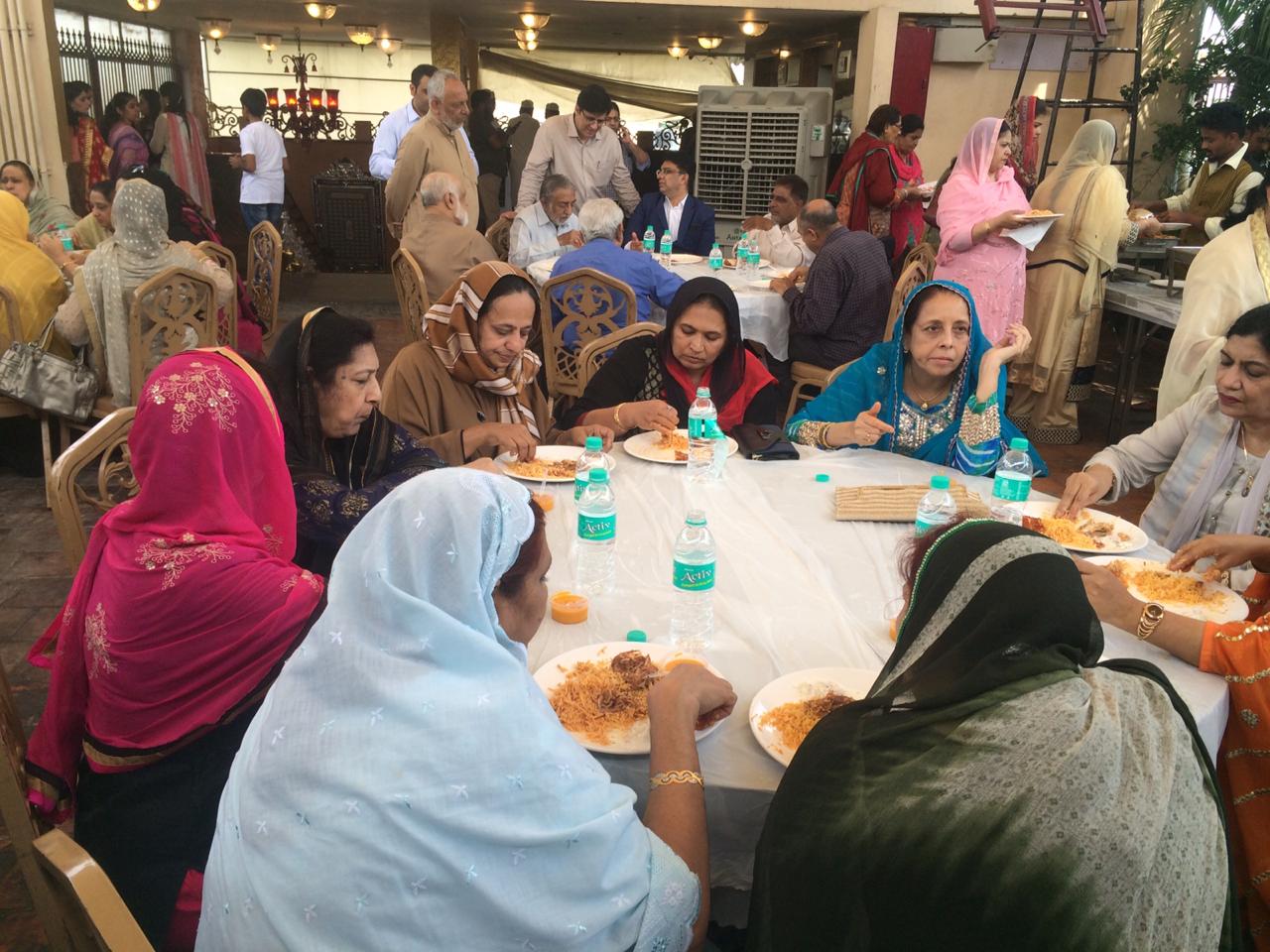 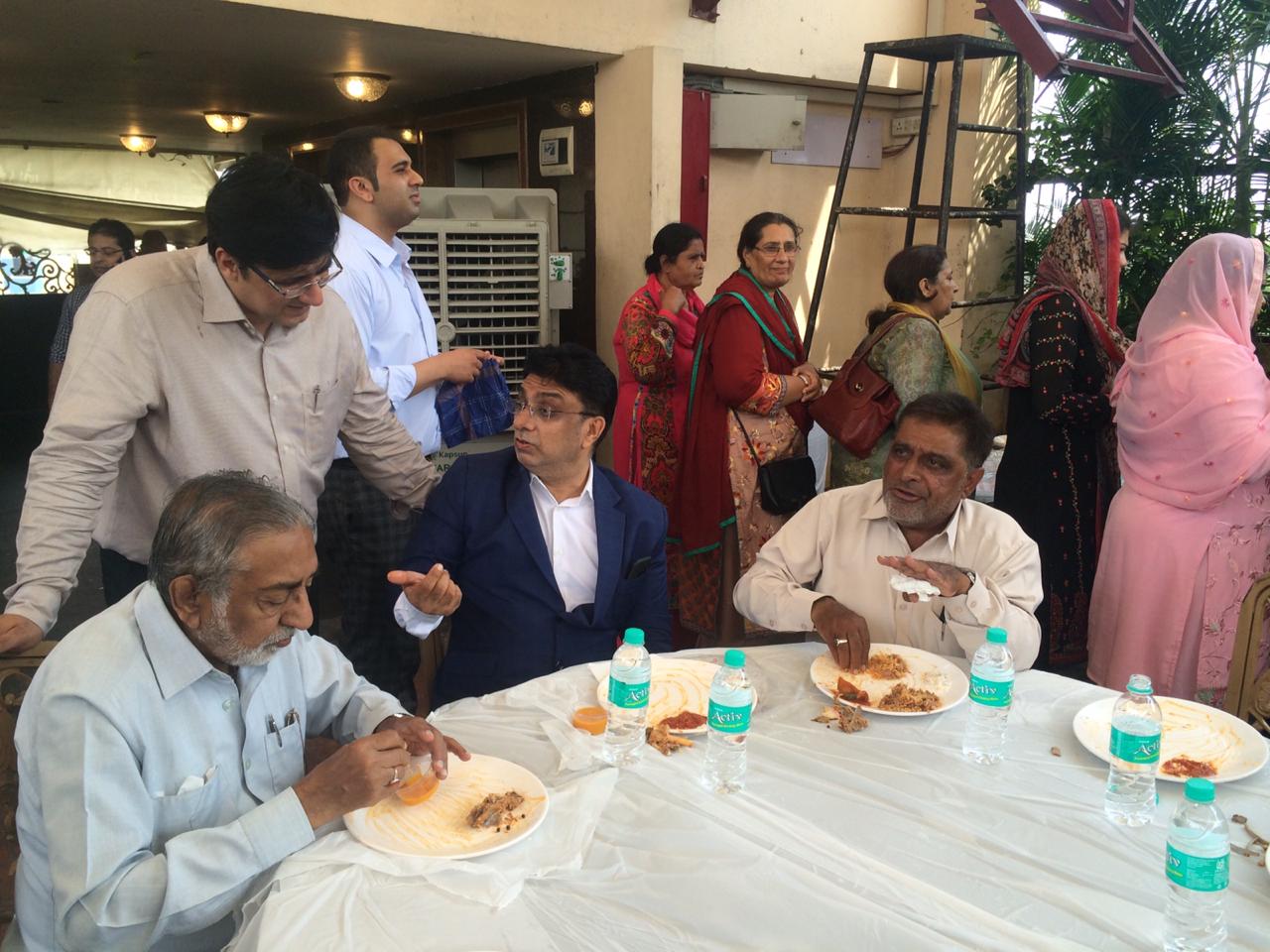 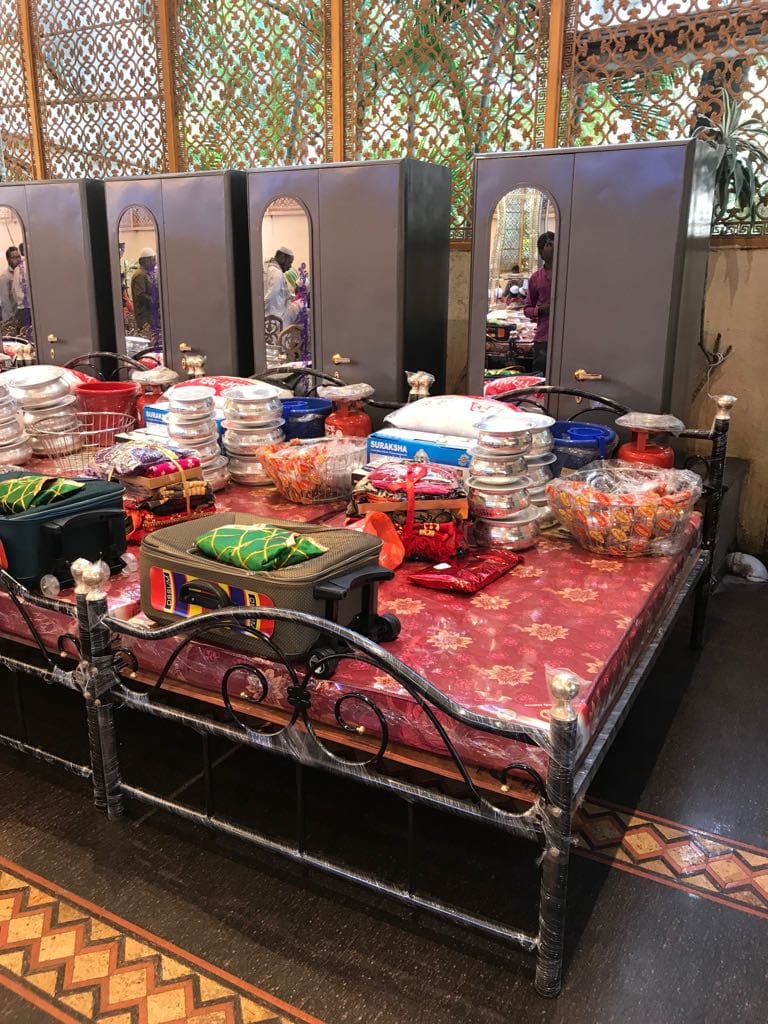 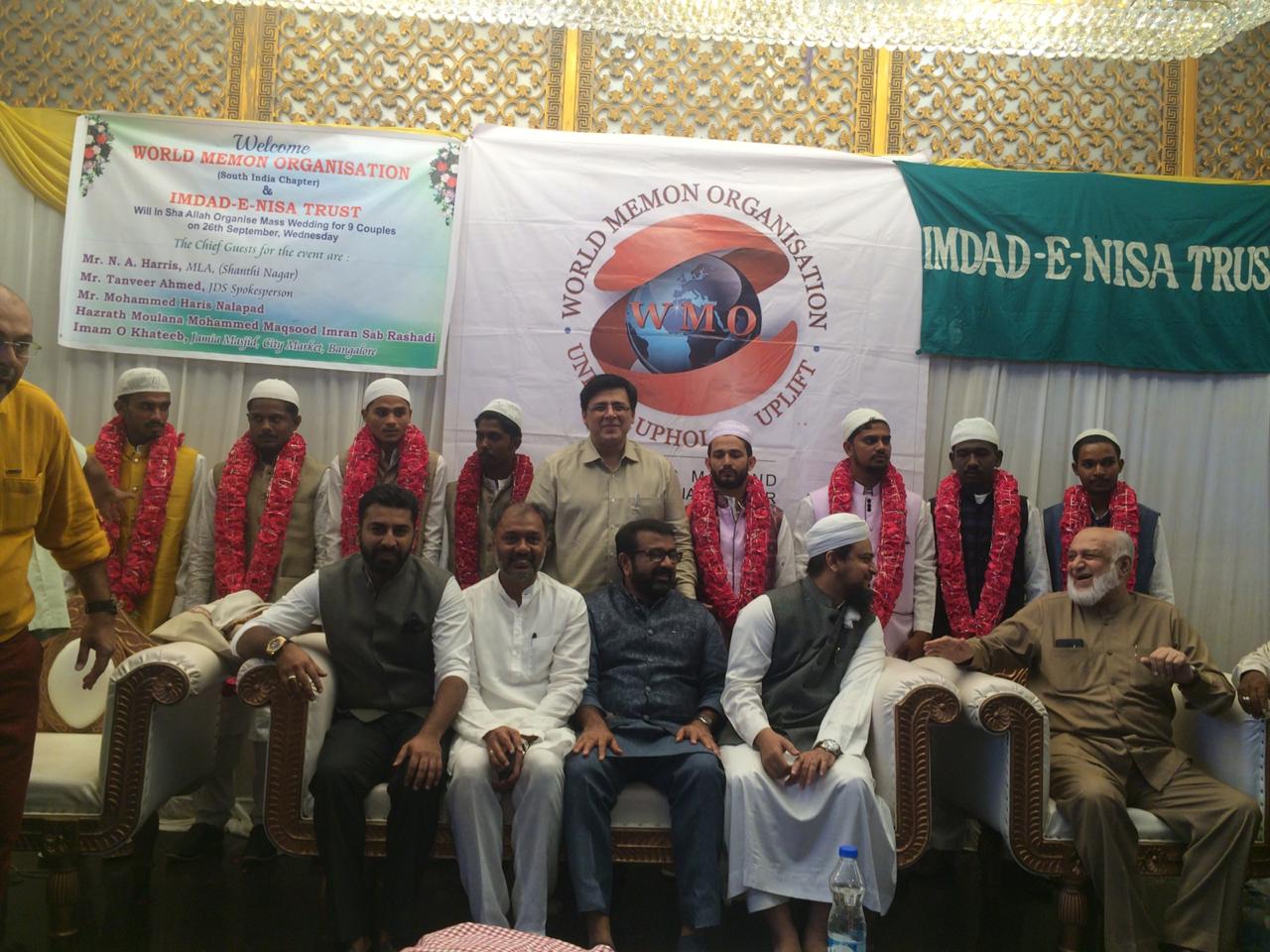 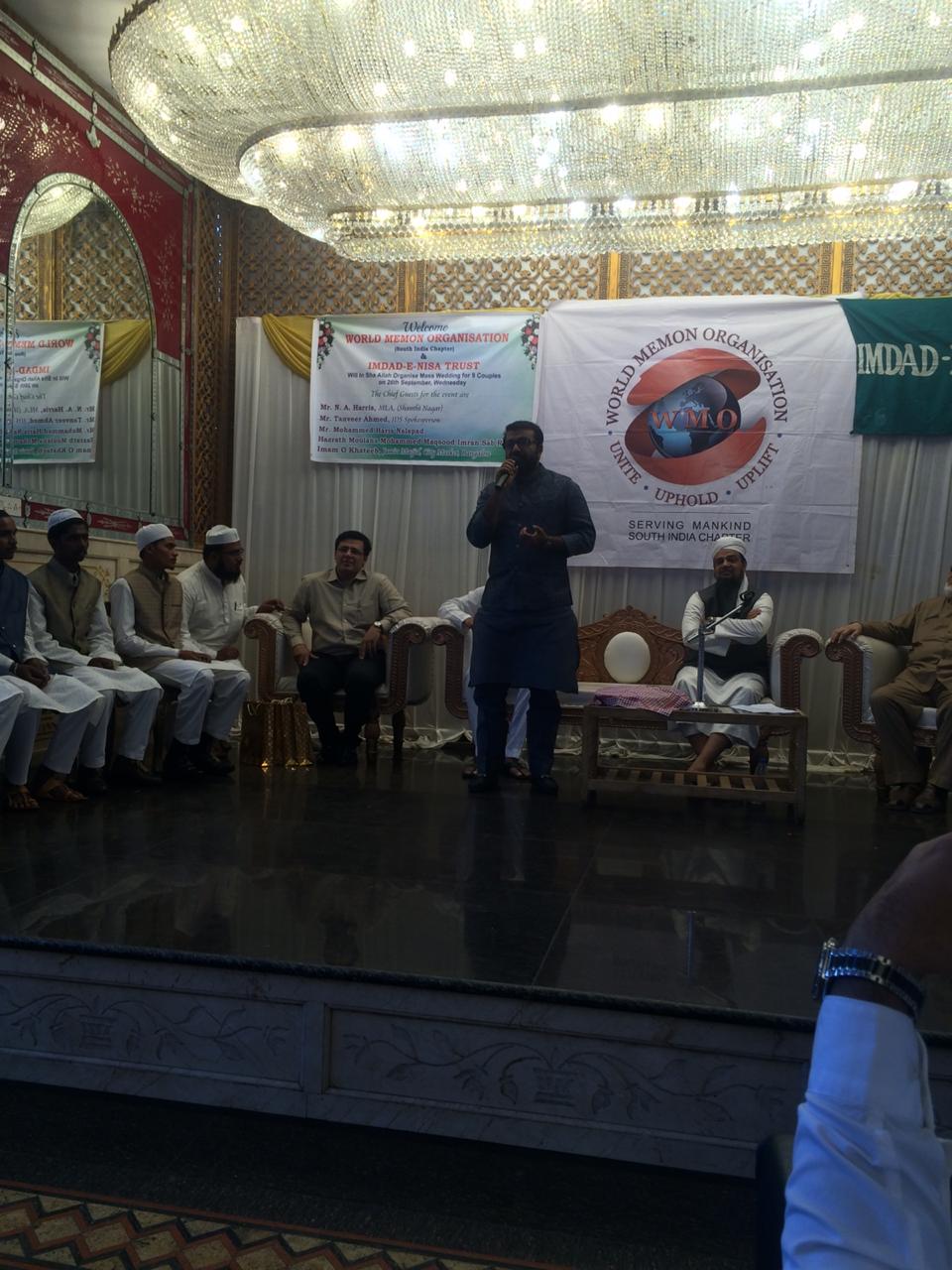 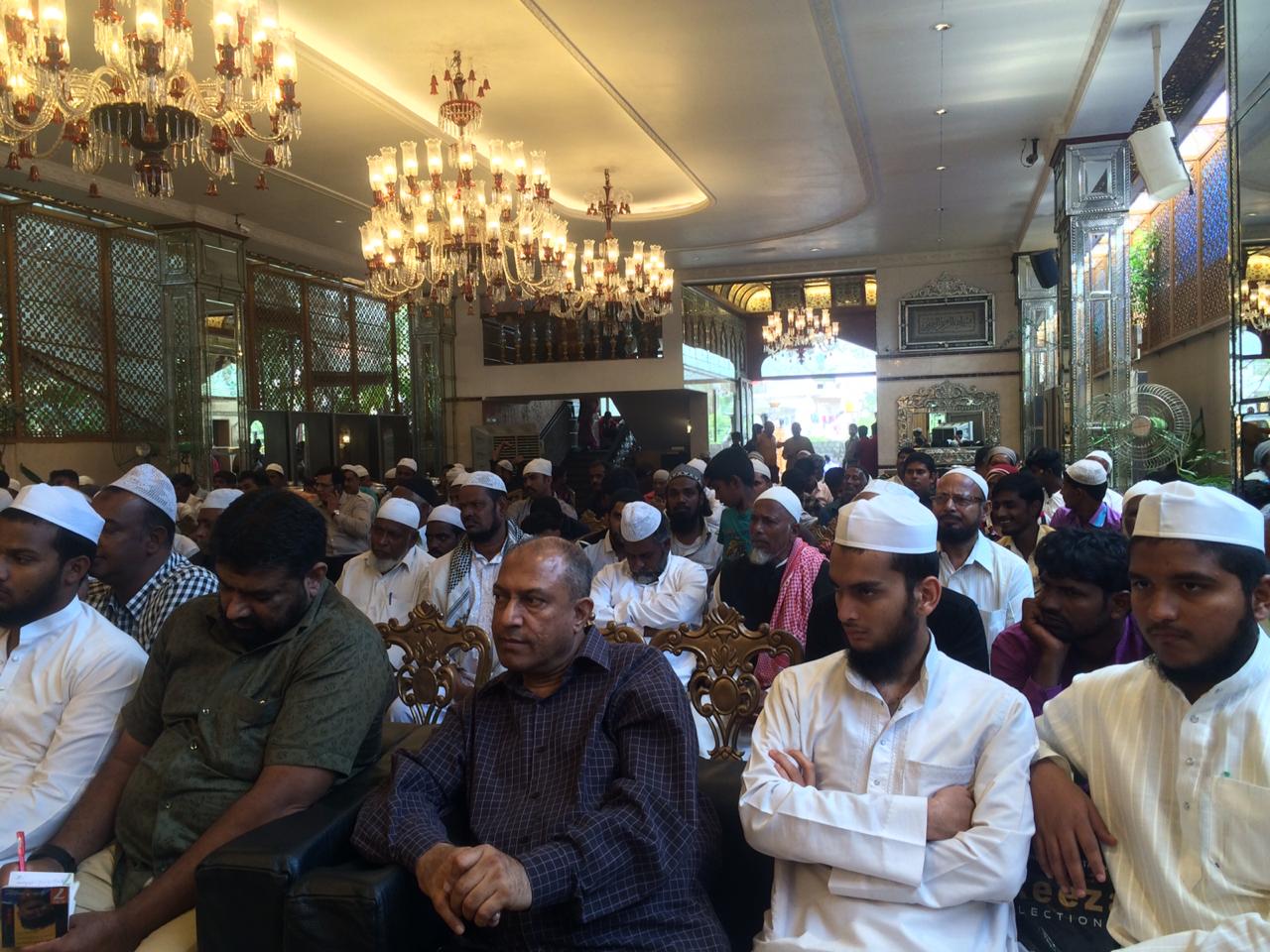 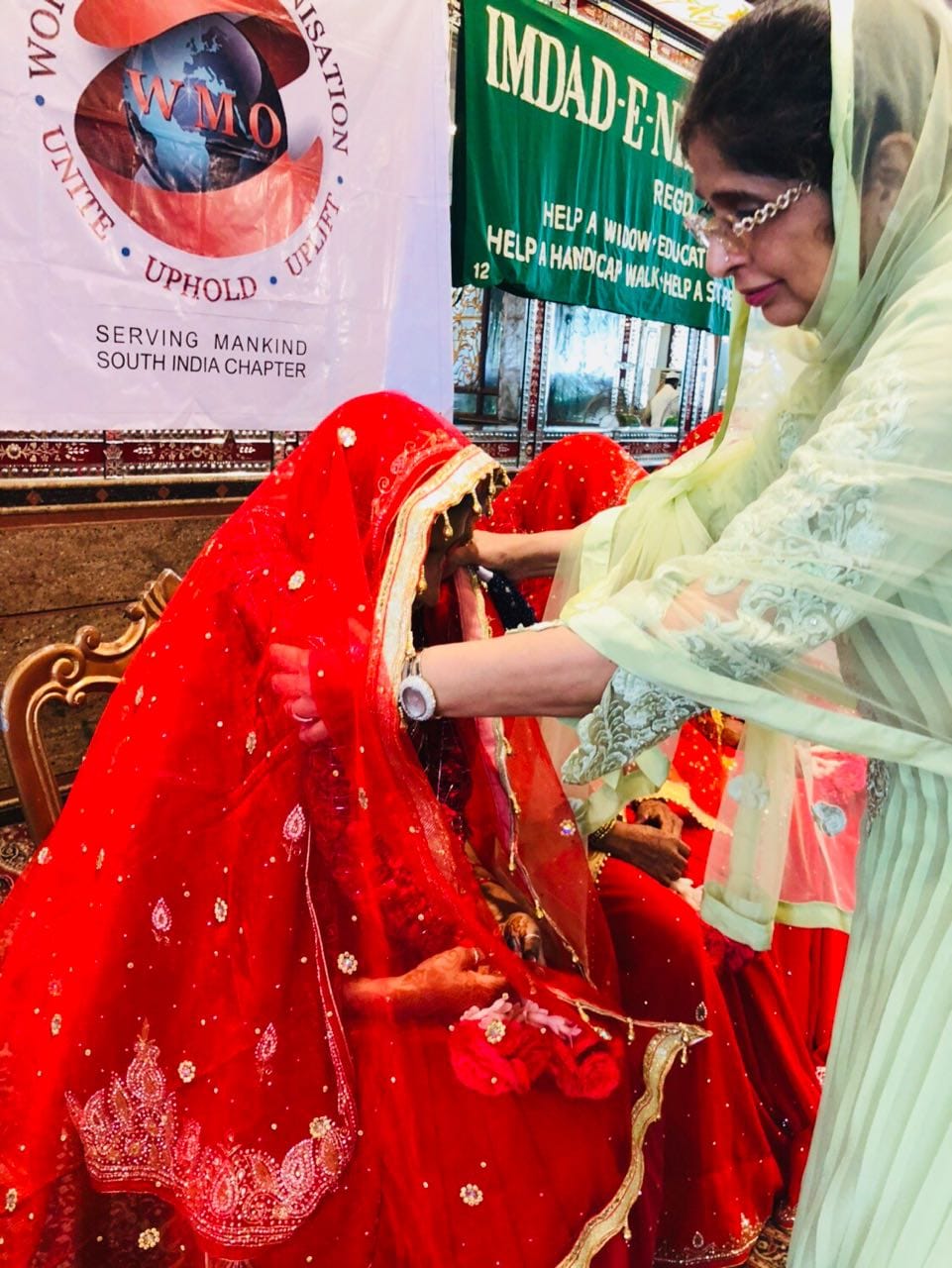 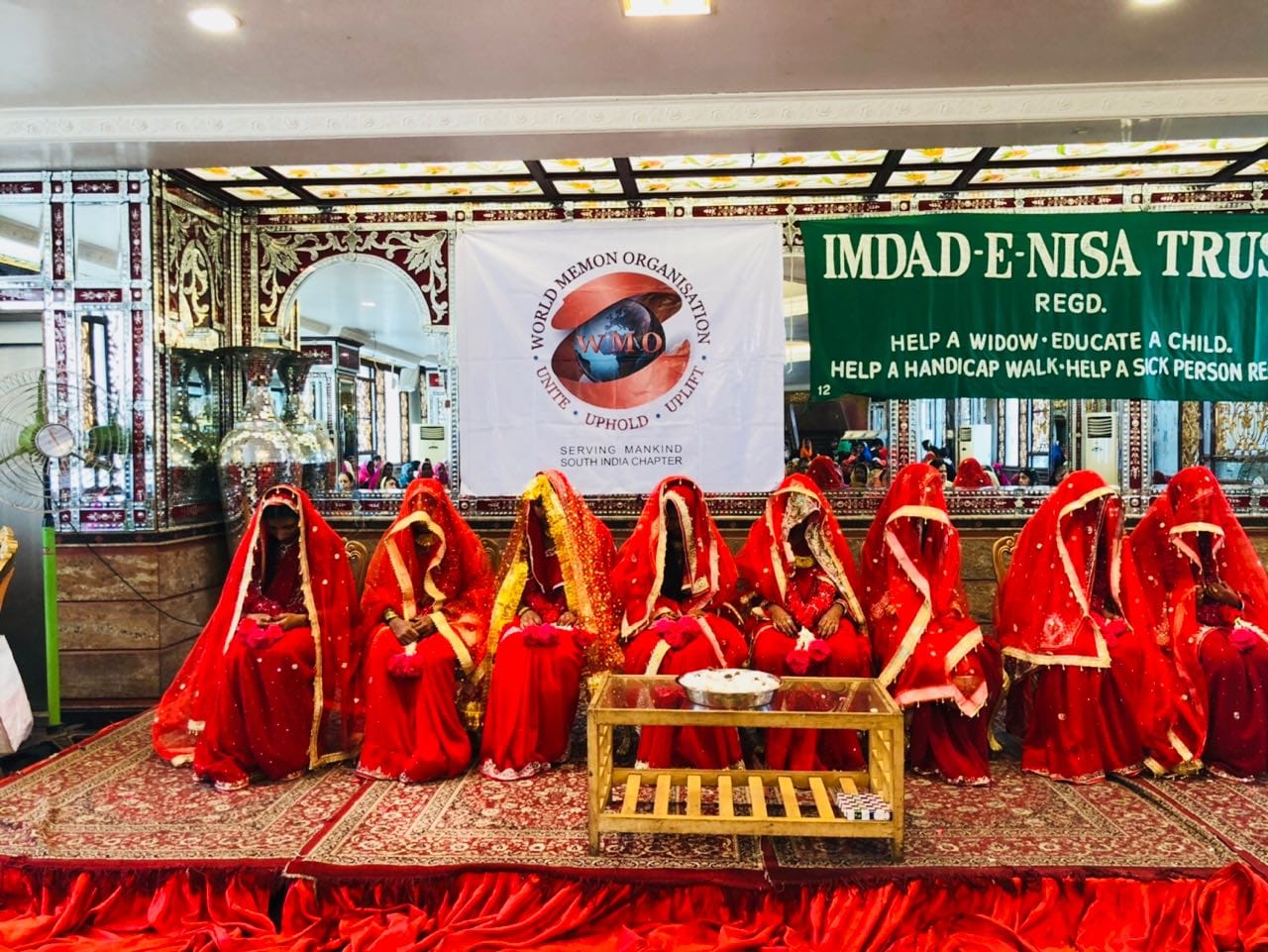 On the 26th of September, the World Memon Organisation, under the banner of Imdad E Nisa invited 800 guests to attend the solemn nikaah ceremony which was followed by a scrumptious lunch. Eight beaming couples tied the knot in the presence of their families, friends and loved ones. The Nikaah ceremony was conducted by Moulana Maqsood Imran, the respected Imam of Jamia Masjid. Political heavyweights, the Honourable N A Haris, Member of the Legislative Assembly and Mr. Tanveer Ahmed, spokesperson for the ruling Janata Dal (S) were amongst the prominent invitees who gave their blessings to the joyous couples.

House hold items including steel cupboards, wooden beds, crockery, pillows, sheets, utensils, buckets, clothes, watches and jewellery were provided by members of the Azeez family. The entire cost of the ceremony, including the ornate decorations and sumptuous lunch were borne by these distinguished members of the WMO South India Chapter.

"When a marriage is fixed in a poor household, the pertinent question that arises for both families is how to raise funds for the upcoming wedding ceremony. In many cases, the expenditure of a daughter’s wedding translates into the father's eternal debts. The time has come to put an end to extravagant marriage ceremonies, rather the funds should be invested in creating a brighter future for the soon to be wedded couple. Mass Marriages are the answer, they ease the financial burden on the families and are a step in the right direction." asserts Mr. Azeez Muhammad Sait, stalwart of WMO South India Chapter who was the driving force behind the event.

His wife Mrs Fareeda Azeez, Chairperson of WMO Ladies Wing South India Chapter and Imdad E Nissa Trust adds, "The evil of the dowry system has crept into our society and weighs down heavily on the parents of the girl child, causing many parents to fall into the debt trap. It is unfortunate that many girls of marriageable age are left sitting at home, twiddling their thumbs as parents cannot afford the unreasonable dowry demands or pay for the exorbitant marriage feasts. It is our humble endeavour to assist such girls hence we have organised the mass marriage ceremony. We also intend to send out a loud and clear message that it is time for others to come forward and donate towards this pertinent cause. Help the weak and downtrodden, help the girl child, make it easy for children from the marginalised sections to be united in holy matrimony and provide the cure to the many ills plaguing society.”

WMO South India Chapter has set the benchmark for others to follow. We hope it leads to many more happy, memorable and eternal unions. We pray that it roots out the archaic social evil of lavish spending on garish wedding ceremonies and paves the path to abolish the demonic dowry system that devours thousands of impoverished families, each year in India.