The Man Who Makes a Difference

by World Memon Organisation on 3 January 2016 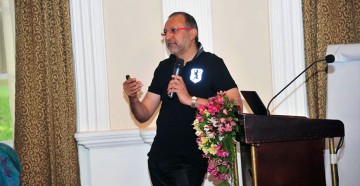 He thrives on challenges and always rises above them. His professional accomplishments amongst many, including former Chairman of KPMG Africa mark his ascendency to the top rung of the ladder and bear testament to his burning ambition and stout resilience.

Donald Trump should pay him royalties for coining the phrase, “YOU ARE FIRED!” He is the only other individual who has used those three words more frequently than Trump. Shape up or ship out! The man lives by those words and means strictly business. He gets the job done. He expects no less from you. The buck literally stops here and he is single handedly accountable for the World Memon Organisation. After all he is their honourable Treasurer.

He takes up the toughest tasks because he firmly believes he can make a difference.

The man credited with galvanising the youngsters, rejuvenating the youth wing, invigorating It with positive energy and putting it on the right track. The impressive list of events around the globe include an international debates competition in Pakistan, an international billiards competition in Dubai, Empowering women in India, an upcoming world class cricket tournament in Mumbai, a sports festival in UK and a team relentlessly promoting the Memoni language in South Africa.

We salute the achievements of Mr. Yunus Suleman with unreserved admiration. He has instilled a sense of purpose within the youngsters and a pride of belonging to the Memon Community. A rare achievement but then Yunus is a very rare commodity.

As he pats the back of his young teammates from around the world for making phenomenal progress in record time, he reminds us of the quote, “Each one of us can make a difference. Together we make a change.”