by World Memon Organisation on 24 October 2019

It included 2 youth conventions, an AGM, a Legacy project to construct the first Memon Hospital in India, a football match, an overnight train journey, the completion of the first Legacy project in India which provided a roof over the heads of 31 underprivileged families and unbridled enthusiasm from an unstoppable force of nature  - Mr. Ehsan Gadawala (VP - WMO North India Chapter).

Mr. Ehsan Gadawala has been flying the WMO flag  high, across the length and breadth of the country, making the WMO presence felt in small towns and remote villages by providing tireless humanitarian services to uplift the community and Humanity in all corners of India.

Education, housing, health care, empowerment, jobs, matrimony - all boxes have been ticked off by Ehsan Gadawala and his dedicated team of Regional Management Committee members of WMO North India Chapter. The ladies and youth wings are a force to be reckoned with, as both contingents are brimming with enthusiasm to initiate projects for the betterment of Humanity.

As the journey of the two WMO stalwarts comes to an end, we hope the infectious verve and vitality of the North India Chapter VP provides them with that last ounce of energy to stand up and applaud the untiring and indomitable spirit of the remarkable Ehsan Gadawala.

On the 12th of September 2019, WMO South India  Chapter (SIC) hosted a gala event which attracted delegates from across the globe. Short speeches and long term goals towards the upliftment of the community were presented to the gathering. 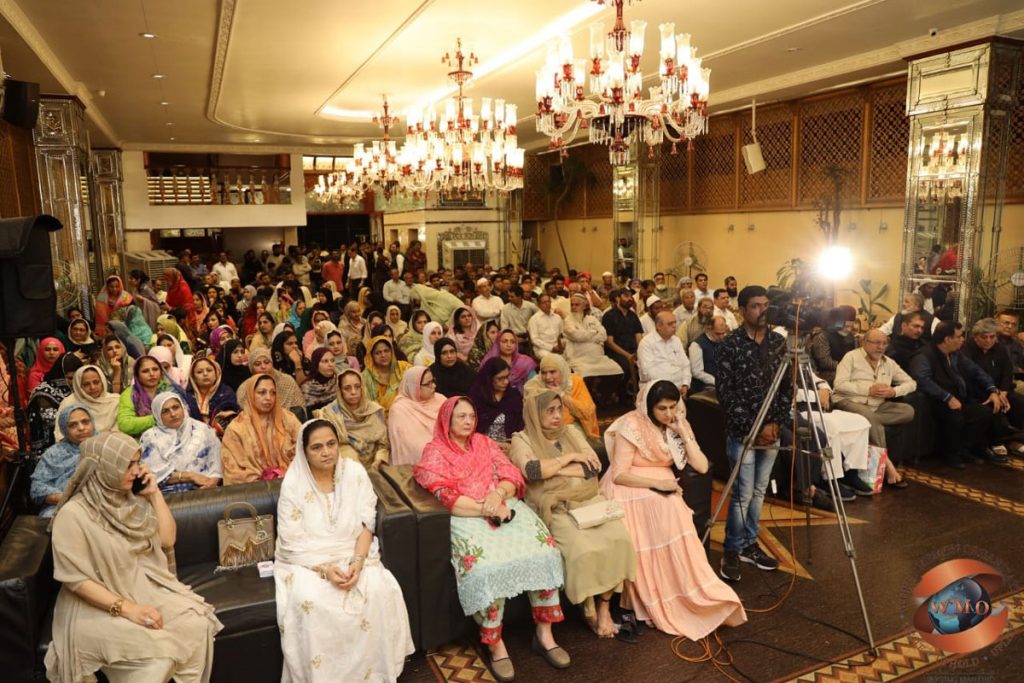 The list of distinguished luminaries who graced the occasion included 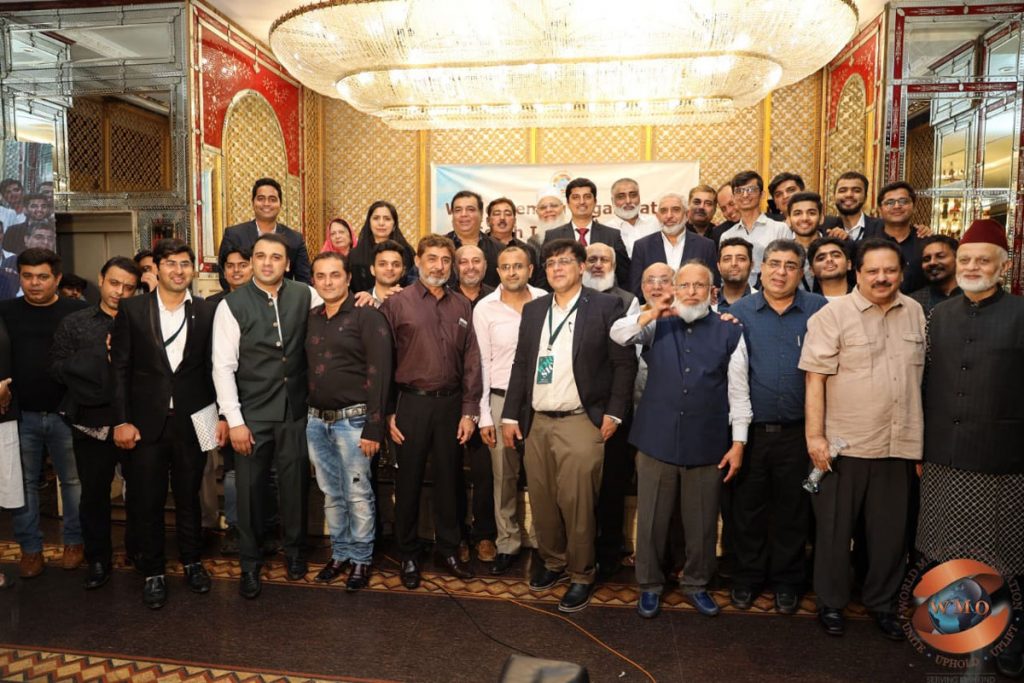 After an appetizing lunch, WMO South India Chapter took to the floor and gave an account of themselves to the visiting WMO delegates. The conference began with a Qirat, followed by a welcome address by Jaffer Musani.

Mr. Jameel-ur-Rehman (Vice President of WMO Youth Wing) presented a roadmap for the year and appointed a team with respective leads to focus and deliver on each important segment:

Regional teams for the cities of Bangalore, Madurai, Chennai and Hyderabad were formed and respective City Chairmen were duly designated with appointment letters from Mr. Abdul Azeez (WMO SIC VP) 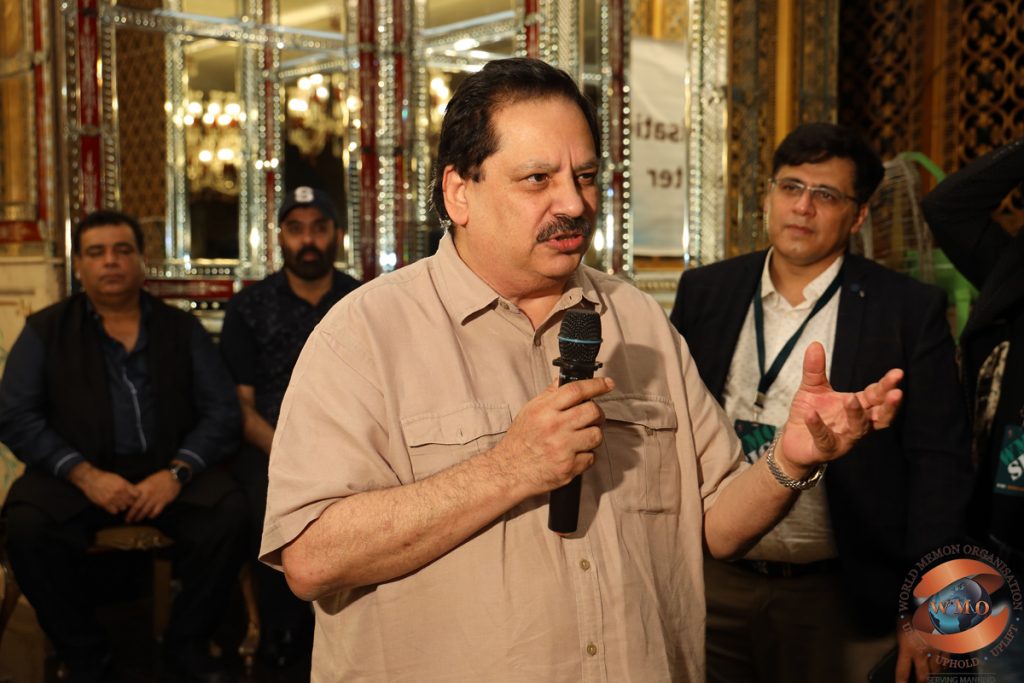 Mr. Ashraf Sattar gave an inspirational speech highlighting the importance of serving the community. This was followed by a brief discourse by Mrs. Masheela Naviwala on the significance of participation of women in social initiatives. Mr. Ehsan Gadawala then addressed the gathering and shared pearls of wisdom from his treasure trove of experience in the field of social welfare. He reserved special  praise and advise for the youth. Mr. Dawood Sulaiman, one of the keynote speakers stressed that persistence is key and elaborated on his successful endeavours in bringing about a change in the taxation policies which benefited the industry as a whole.

Later a Q&A session was organized by Faiz Mohammed (Assistant VP- WMO Youth Wing) and Wasim Kidiya. The conference ended with a vote of thanks by Munir Noorani followed by Dua by Maulana Ansar Raza. 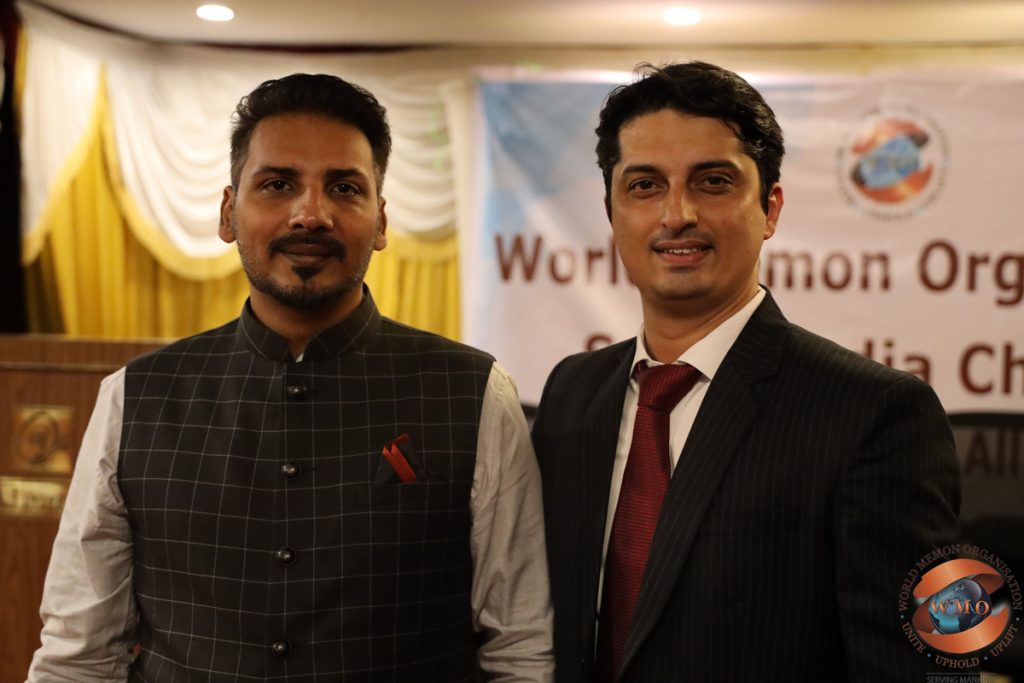 A cold, grey and dreary day in Bengaluru concluded on a bright note with a glittering gala dinner at Adam's Heritage which brought in over a thousand guests.

Mr. Azeez Sait welcomed the gathering in his trademark style with a flourish of Shayaris. Continuing with his mesmerizing oration, Mr. Sait gave some thoughtful insights. He observed that the division of Memons in the name of tradition and culture had weakened the collective power of the community and WMO was keen to unite and connect each and every Memon from across the globe, irrespective of them being Halai, Kutchi or Kharadi.

Now it was time for Mr. Adil Azeez (Assistant Vice President of WMO-SIC) to take the floor. In his brief address he put the spotlight firmly on the prime objective of WMO - to Uplift the Memon Community. 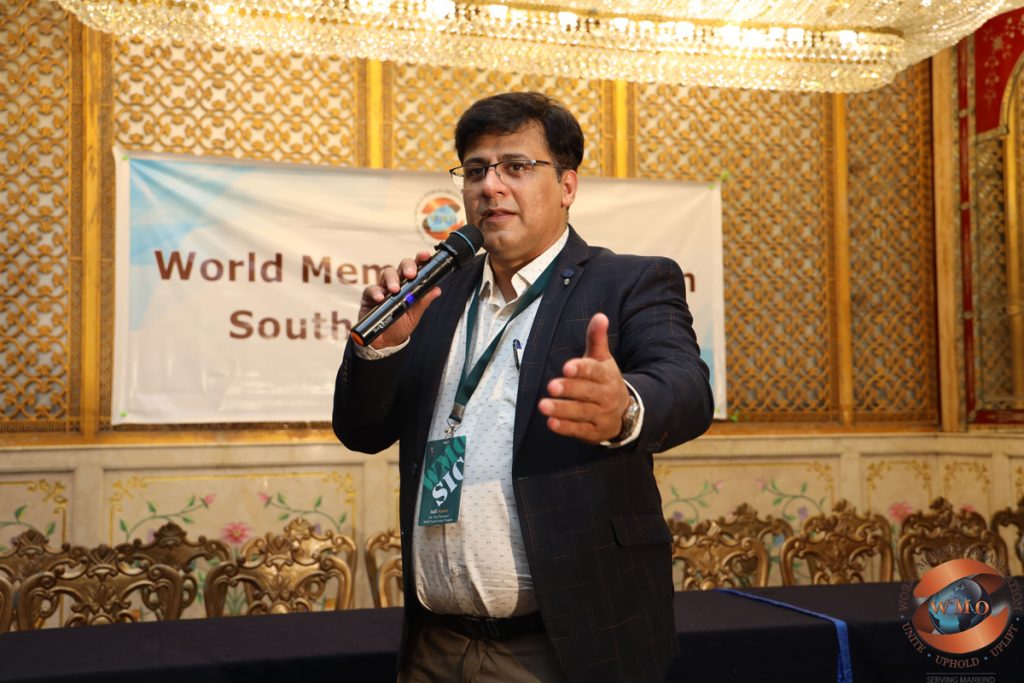 "The World Memon Organisation firmly believes that if you give a man a fish, you feed him for a day ; teach a man to fish and you feed him for a lifetime. Empowerment of men and women belonging to the marginalised sections of society has been one of the most essential humanitarian services provided by WMO. Over the years, hundreds of auto rickshaws and thousands of sewing machines have been distributed to enable families to earn a livelihood, provide their children with an education and ensure a life of dignity. Along the same lines, WMO South India Chapter has rolled out the micro finance program whereby loans will be given to suitable candidates from the Bengaluru Memon community to procure vehicles. Sewing machines would also be donated to deserving women under the program," stated Adil Azeez.

He hoped that the hands that were outstretched for Zakat would soon turn around and give Zakat. That would be the ultimate goal of these initiatives which were rolled out in Bengaluru. Adil praised WMO North India Chapter too for providing jobs to thousands of deserving youngsters by hosting job fairs at regular intervals across the country.

A WMO Membership card was formally launched soon after. 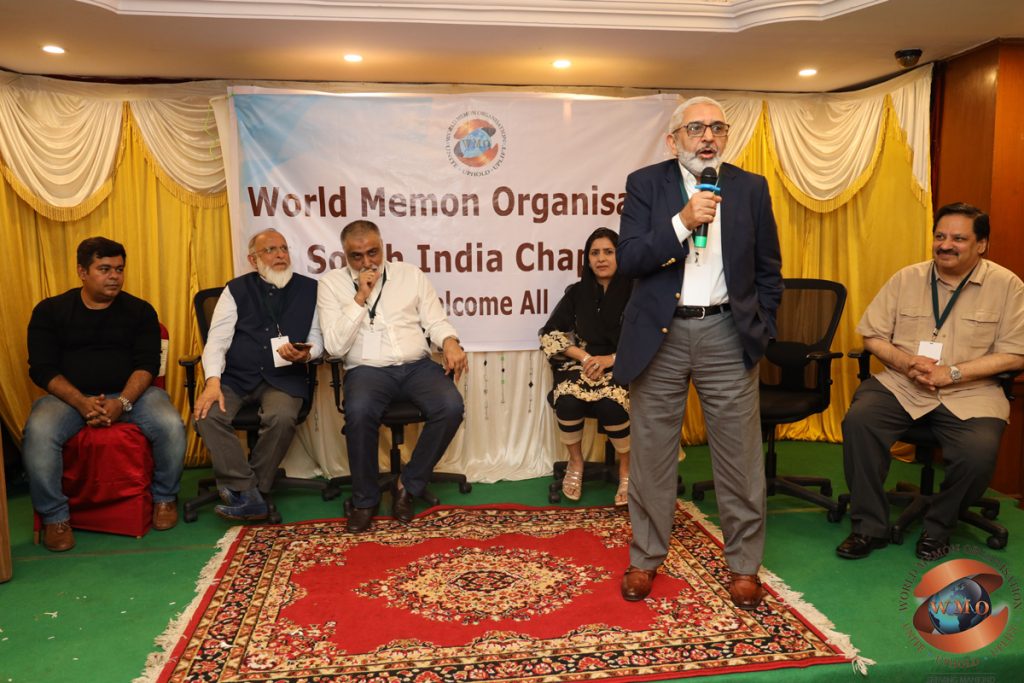 Finally,  Mr. Haroon Kareem walked to the podium and congratulated WMO-SIC for hosting a wonderful event and gave a detailed account of the organization since it's inception in 2002. He elaborated on the extensive humanitarian services provided by the organization including humanitarian aid, education, housing and empowerment to uplift the community in all corners of the World. Since 2002, 60 million dollars had been contributed towards the many worthy causes undertaken by the organization and he concluded by thanking all WMO members who worked relentlessly under its banner for the betterment of Humanity.

WMO have established themselves as Caretakers of Humanity for almost two decades now. The organization provides effective medical and health care to the underprivileged across the globe. From free medicines to diagnostic tests, from providing kidney dialysis to a sizeable number of afflicted brothers and sisters on a daily basis to making life saving surgeries possible for the less fortunate. The organization strives to provide quality health care to the marginalized. The Gift of Sight is an exceedingly thoughtful, collaborative program which provides free corneal transplants to the visually impaired in Pakistan. Healthy corneas are exported from Sri Lanka, courtesy WMO Far East Chapter. 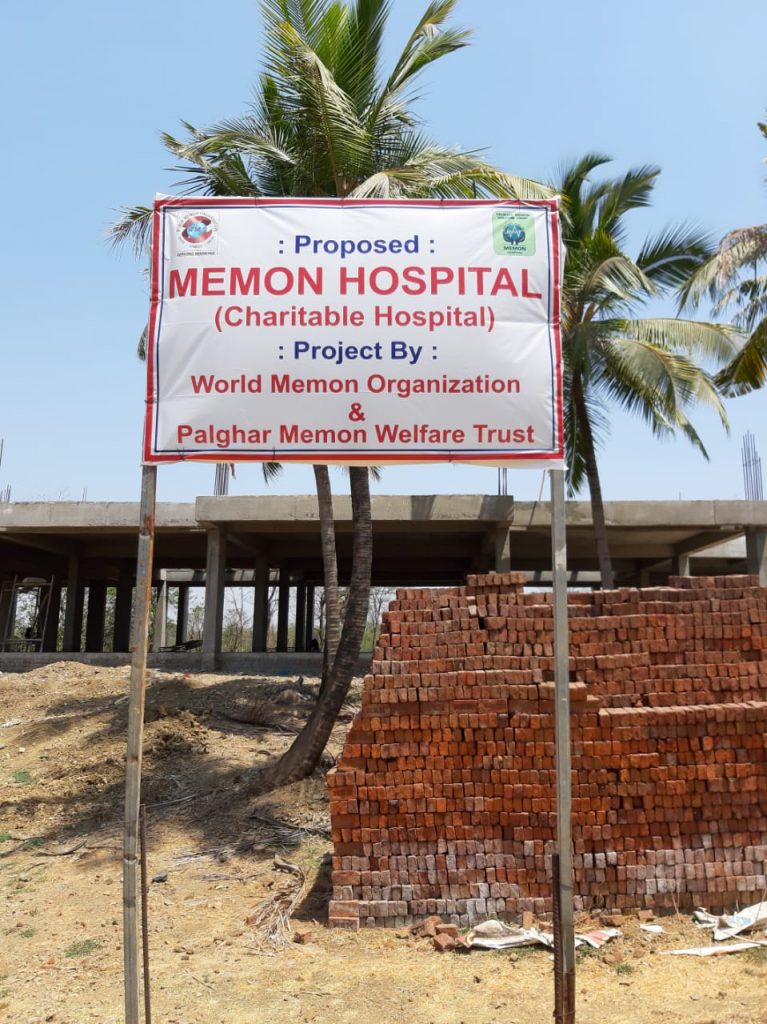 The next Legacy project in India is the upcoming, sprawling 135 bed Memon Hospital in Palghar - a satellite town of Mumbai. The state of the art, multi-speciality hospital will cater to the underprivileged from across the country. 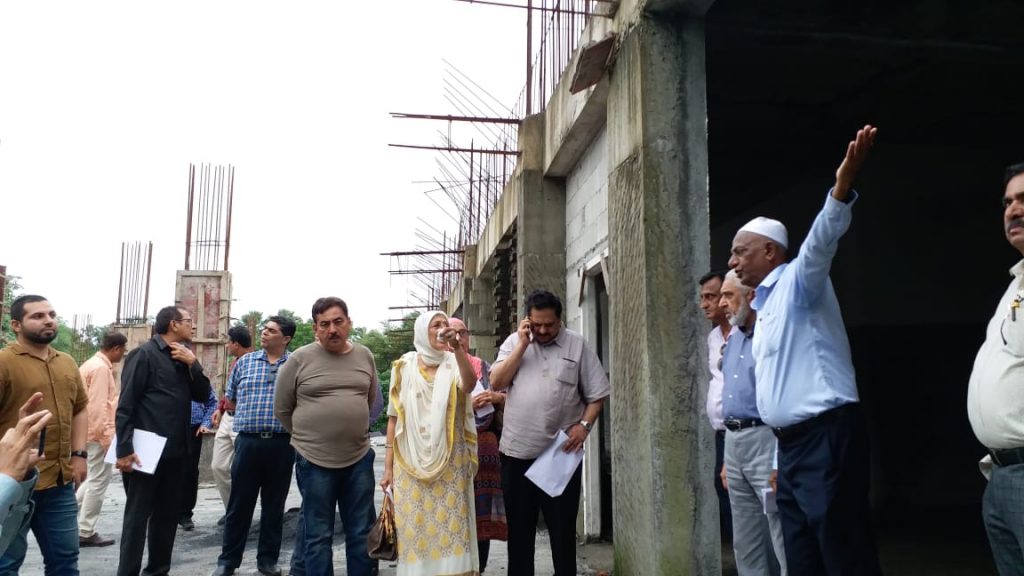 “We support Life. We strongly believe that every human being has the right to quality medical care. Our vision is a World without suffering.” asserted Mr. Haroon Karim (Chairman - WMO Board of Trustees) as he arrived in Palghar on the 14th of September to inspect the construction work and get updates on the progress of the Memon hospital.

The 6.5 million dollar project is being completed in phases. The first 1.5 million, 55 bed ground floor structure is at the half way stage. The Palghar Memon Welfare Trust is collaborating with WMO to bring the intial phase of the project to fruition by December 2019.

"WMO is resolute in its belief that quality medical care should remain firmly within the frail grasp of penury. With the swift construction of the Memon hospital in Palghar, we have taken rapid strides to achieve that paramount objective," added Mr. Ashraf Sattar (Deputy Chairman  of WMO Board of Trustees) as he joined Mr. Karim on the hospital premises in Palghar.

Mr. Sattar concluded, "We are striving to achieve our objective of making free of cost, quality healthcare a reality for all in India. In a few years time with steadfast support from the WMO, the Memon Hospital will stand completed and we pray it becomes a beacon of hope for health care and the marginalized in India." 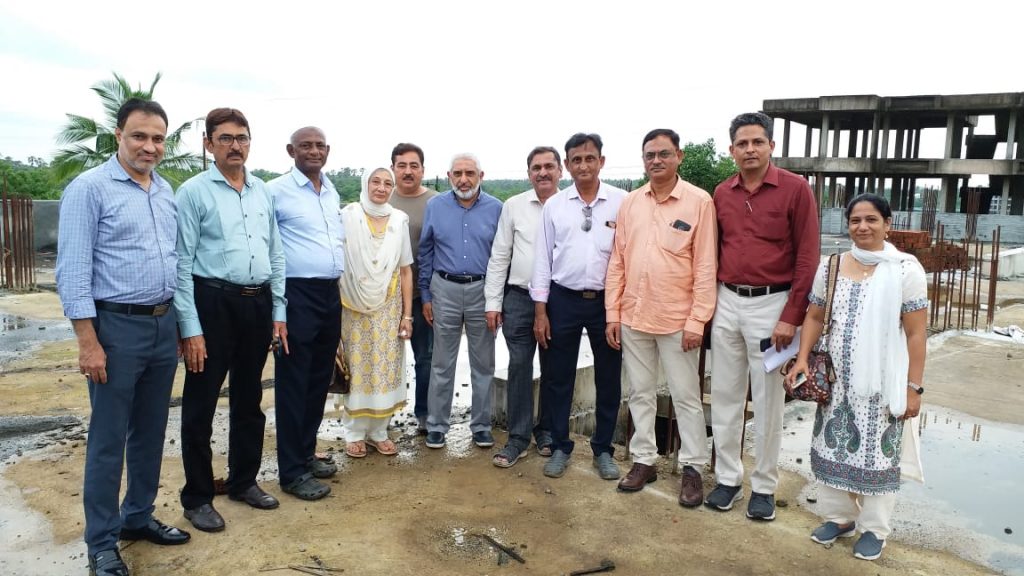 The Memon Youth Parliament is a mock Parliament event that aims to find modern day solutions to pertinent issues faced on a daily basis by a majority of the Memon community. The objective of the initiative is to create a platform which brings together the brightest, young minds within the Memon community whereby they can freely voice their opinions and form a collective ideology for the betterment of the community and Humanity. 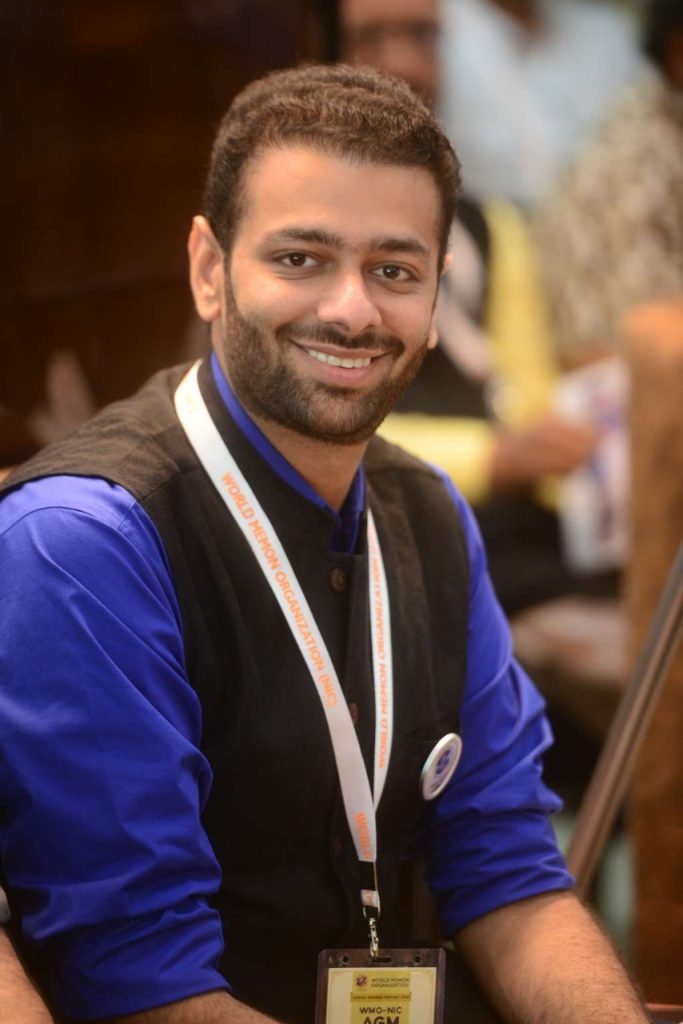 The event was a resounding success and laid the cornerstone of the WMO Global Youth Wing (North India Chapter). The occasion was graced by powerful orators, distinguished Memons from the arenas of politics & industry and youngsters from all corners of India.

An exceptional speech was delivered by Keynote speaker Kanhaiya Kumar. The revolutionary, firebrand student leader, an orator par excellence and maverick statesman from Bihar who epitomizes courage and fearlessness addressed the WMO Youth Parliament Session at the majestic Bal Gandharva Rang Mandir and brought the evening to life.

"Never be afraid to raise your voice for honesty and truth and compassion against injustice and lying and greed. If people all over the world...would do this, it would change the earth."

"Raise your voice, ask the difficult questions, enter an engrossing debate, drive home your point, be heard! Be the change you want to see in the World!!, thundered Kumar as he brought the house down.

The evening came to an end with an engrossing football match which saw the two top Memon teams compete with each other for the coveted trophy. 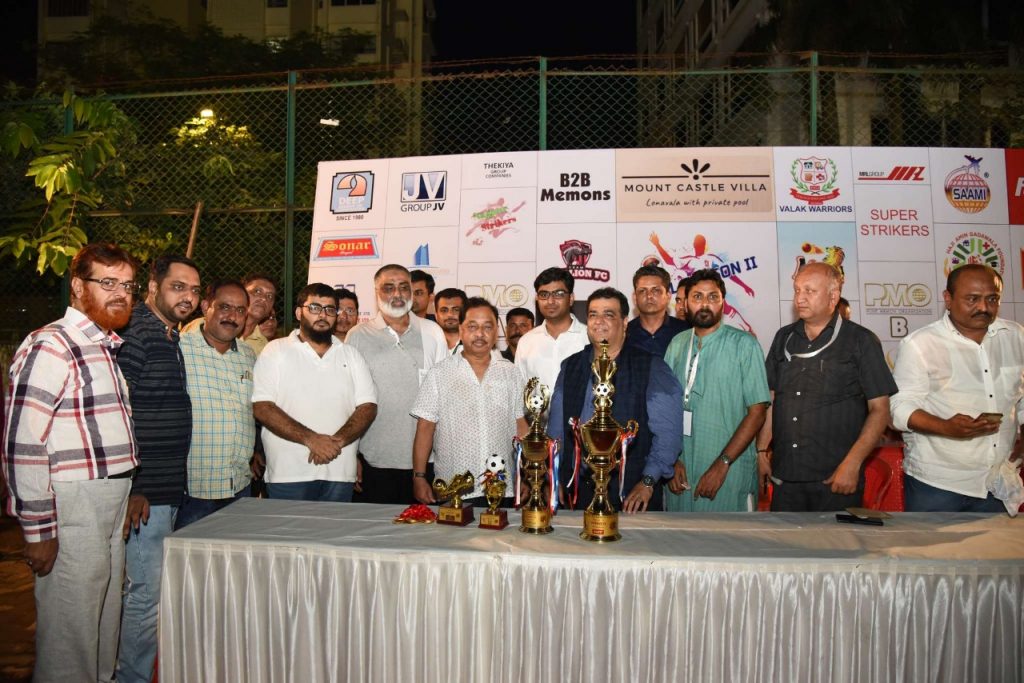 The local WMO North India Chapter (NIC) AGM was hosted at the scenic Islam Gymkhana which adorns the iconic Queens Necklace road along the Mumbai coastline.

The event was attended by the crème de la crème of the Mumbai Memon community. The Regional Management Committee (NIC) took centre stage and presented the broad spectrum of humanitarian work accomplished in India during the year to an appreciative gathering. 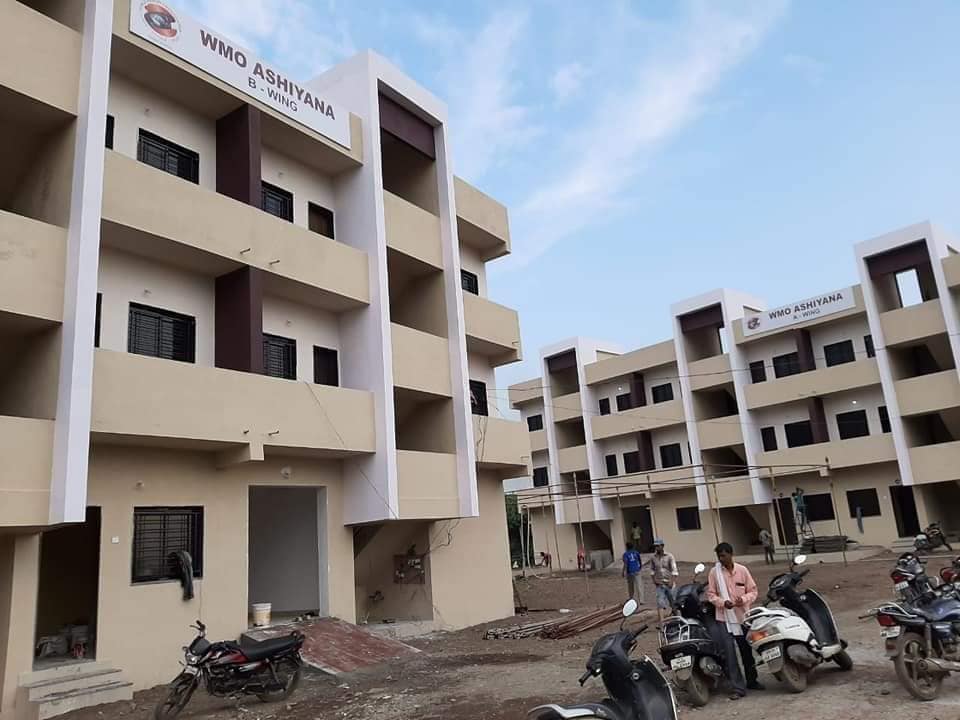 On the 16th of September, 31 underprivileged families of the Memon community moved into their very own homes in Akola. As the first Legacy project of India stood completed Ashiyaana welcomed the 31 families into her fold. Each appartment was a spacious 2 bedroom, hall and kitchen structure spread over two housing wings with all interior work completed including bathroom and electrical fittings. 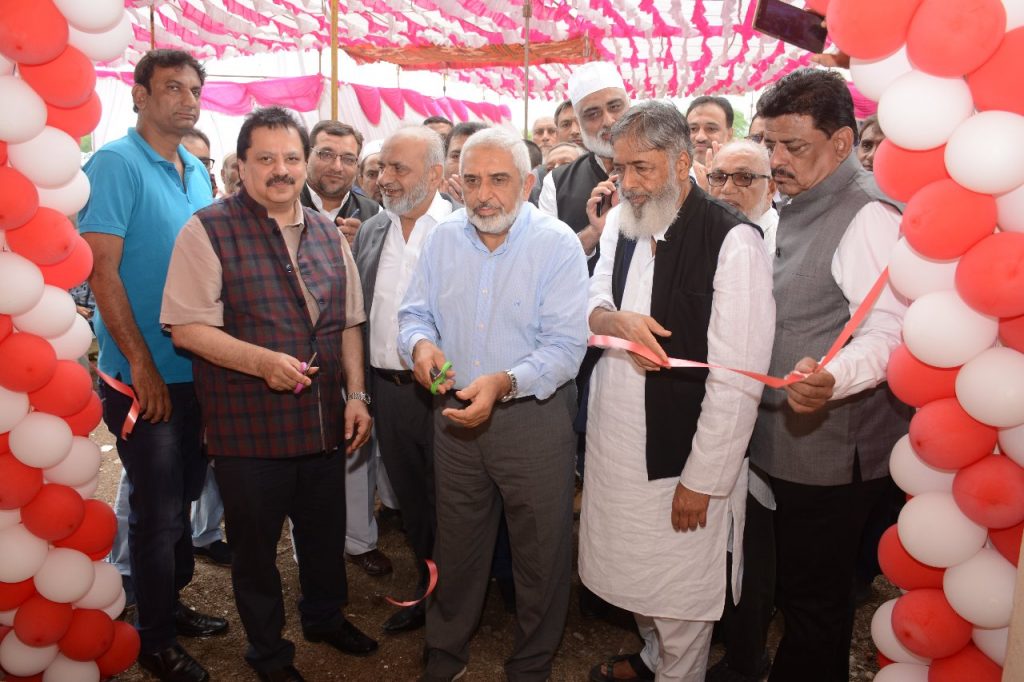 The inaugural ceremony was attended by several WMO luminaries from India, Sri Lanka and the UK. Mr. Haroon Karim (Chairman of WMO Board of Trustees) inaugurated the premises, along with Mrs Naseem Majid Ranani and handed over the keys to the deserving families. The occasion was peppered with joyous scenes and tears as the eyes of several family members welled up as they became proud home owners on the memorable day.

The word 'Ashiyaana' means a nest. A most enduring legacy - a roof over the heads of marginalized families of the Memon Community - a nest for all to come home to.