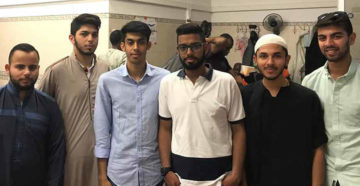 Sintra is a picturesque city situated on the Portuguese Riviera. It is a major tourist destination in Portugal, famed for its ornate architecture.

The Global Youth Wing of Europe Chapter under the leadership of Irfane Liyakat Hameed hosted iftar meals for 150 Muslim brothers at the Sintra Masjid. Irfane and his youth brigade repeated this feat on a regular basis throughout the holy month of Ramadan. The brothers are mostly African labourers who are working on minimum wages in Europe and are striving to provide a better life for their families back home.

Irfane Hameed is a zealous 18 year old who is spearheading the Iftars and is ably supported by a team of committed youngsters. Uwais Majeed, Suheil Mamad, Mikail Ossman, Saif Shaid and Imran Rassid are devoted towards this admirable cause and the ardent group of teenagers plan to do much more in the coming months.

After serving several iftar meals to the fasting at the Sintra Mosque and delivering Ramadan Ration bags to the marginalized in the city, the youth wing intends to spread the distribution of food packs to other cities in Portugal. Each pack contains cooking oil, a pack of biscuits, milk, cornflour, orange juice, beans, chickpeas and canned fruits.

Next, the youth wing plans to collect clothes, books, toys and other essential items through a door to door campaign and pass them on to the needy. The group wants to focus their attention on children with special needs and the disabled. We applaud their efforts and appeal to the people of Portugal to support our youngsters in their benevolent work.

Irfane is following in the footsteps of his father Liyakat Hameed, a prominent Memon personality from Portugal who played a stellar role in introducing the organization to the country and is flying the WMO flag high in the Portugese Republic. We are very proud of Irfane who has taken up the mantle of the Youth Wing and is proving to be a worthy son of a very worthy father.

May Allah Swt bless the family, reward them abundantly for their endeavours and grant them the strength to continue to Serve Humanity under the WMO banner for many years to come.