by World Memon Organisation on 17 February 2021 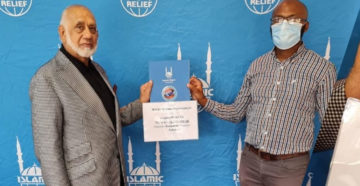 A devastating fire at the Booysens informal settlement has left its residents homeless and destitute. The densely populated region of Johannesburg city went up in flames on Friday, the 22nd of January, with more than 750 shacks being razed to the ground.

Most residents belong to the poorest strata of society and have lost everything in the fire. The World Memon Organisation Africa Chapter has partnered with Islamic Relief to provide a swift and coordinated response to bring relief to the stranded residents.

We are thankful to our donors for their generosity as a sizeable sum of R 345,000 (three hundred and forty-five thousand rands) was promptly collected by WMO Africa Chapter towards the pertinent cause. May the Almighty reward your kindness.

We appeal to our brothers and sisters to come forward and donate towards the victims of this horrific catastrophe. More than 2000 displaced and deprived people, including children are waiting for their next meal and the only prized possession they own is the single pair of clothes left on their back.

May the Almighty ease their suffering and bring them solace during their most vulnerable time.