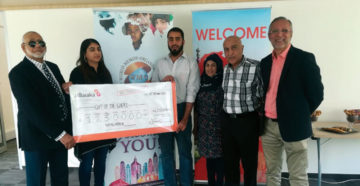 Mohamed Ahmad, a resident of Palu recalls leaving his home to attend the late afternoon prayers on Friday when the earth shook violently below his feet. Before he could rush back and warn his family, his house crumbled before his eyes, burying his loved ones under the rubble of the collapsed building. There are many more horrific tales emerging from the ravaged city of Palu as survivors recount colossal waves rising from the ocean and tearing through the city, leaving behind a trail of death and destruction.

Indonesia is reeling yet again from another natural disaster. A powerful 7.5-magnitude earthquake and resulting tsunamis that struck the island of Sulawesi on the 28th of September have left more than 1,600 dead and around 70,000 homeless. The devastating earthquake liquefied the soil, swallowing up homes and burying thousands of hapless victims. The shifts on the ocean floor spawned tsunamis, creating 20 feet walls of water that lashed the shore, inundated homes and entombed hundreds of people.

Thousands are believed to be missing in the towns of Palu, Baleroa and Petobo, situated in the Central Sulawesi province of Indonesia. Rivers of mud swept away entire neighbourhoods in the aftermath of the devastating earthquake and ensuing tsunami. Apocalyptic scenes were witnessed in Petobo where dozens of villages disappeared into the ground, soil liquefied into quicksand, making it almost impossible for rescue teams to extract bodies. The government announced that after 11th October, these decimated areas would be designated as mass graves and left untouched, causing the death toll to rise to an astounding 5000. With thousands entombed and hundreds critically injured, the stench of death fills the air in Sulawesi.

Nisrina, a resident of the Petobo village is living on the street opposite her home with her infant daughter. She is waiting for her husband and son to return from the mosque since they left for Friday prayers on that fateful day. Its been two days, her hollow eyes keep looking earnestly in the direction of the mosque and flicker with hope at any sign of resemblance from the emerging crowds. Nisrina is too terrified to enter her home as the walls shake under the effects of the aftershocks and could collapse at any moment. Several mosques were flattened under the dual impact of the earthquake and tsunami with many victims still trapped under the rubble. With the Government abandoning their search for survivors, Nisrina’s hopes have turned to despair as the wait for her loved ones becomes endless.
WMO has always answered the call of the unfortunate victims of a human tragedy or a natural calamity in any part of the World. The organisation has been on the forefront and has contributed in every possible way to alleviate the pain and misery of those who seek refuge under these tragic circumstances.

WMO Africa Chapter, led by trustee Gulaam Abdoola, collected one million rands within a few hours towards the victims of this mammoth tragedy. The donation drive was fuelled by Mr. Yunus Suleman (Treasurer – WMO), supported ably by Mr. Feizul Ayob (VP – WMO Africa Chapter) and several members of WMO Africa who stepped up to the plate and donated generously towards this pertinent cause.
Tens of thousands of Indonesia’s earthquake and tsunami survivors are homeless, they will be living in makeshift tents and shelters for the next couple of months under the constant threat of an impending epidemic that unleashes in these squalid conditions. Much more needs to be done as our work is cut out to ensure that the survivors are met with their immediate needs of adequate shelter, food and water. Relief supplies, including hygiene kits for families, medicines and water sanitation to prevent the outbreak of disease are the need of the hour. Children have displayed signs of deep anguish and despair, they are especially vulnerable at this juncture as many have lost their parents, family members and homes hence child protection is a critical aspect of the on going rescue mission in Indonesia.

Please donate towards this pertinent cause. Your timely contributions help us to Serve Humanity at their most vulnerable times.
May Allah Swt reward members of the Africa Chapter for their generosity and ease the suffering of the people of Indonesia.