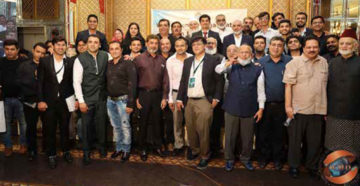 On the 12th of September 2019, WMO South IndiaChapter (SIC) hosted a gala event which attracted delegates from across the globe. Short speeches and long term goals towards the upliftment of the community were presented to the gathering.

The list of distinguished luminaries who graced the occasion included

After an appetizing lunch, WMO South India Chapter took to the floor and gave an account of themselves to the visiting WMO delegates. The conference began with a Qirat, followed by a welcome address by Jaffer Musani.

Mr. Jameel-ur-Rehman presented a roadmap for the year and appointed a team with respective leads to focus and deliver on each important segment:

Regional teams for the cities of Bangalore, Madurai, Chennai and Hyderabad were formed and respective City Chairmen were duly designated with appointment letters from Mr. Abdul Azeez (WMO SIC VP)

Mr. Ashraf Sattar gave an inspirational speech highlighting the importance of serving the community. This was followed by a brief discourse by Mrs. Masheela Naviwala on the significance of participation of women in social initiatives. Mr. Ehsan Gadawala then addressed the gathering and shared pearls of wisdom from his treasure trove of experience in the field of social welfare. He reserved special praise and advise for the youth. Mr. Dawood Sulaiman, one of the keynote speakers stressed that persistence is key and elaborated on his successful endeavours in bringing about a change in the taxation policies which benefited the industry as a whole.

Later a Q&A session was organized by Faiz Mohammed and Wasim Kidiya. The conference ended with a vote of thanks by Munir Noorani followed by Dua by Maulana Ansar Raza. A cold, grey and dreary day in Bengaluru concluded on a bright note with a glittering gala dinner at Adam’s Heritage which brought in over a thousand guests. Mr. Azeez Sait welcomed the gathering in his trademark style with a flourish of Shayaris. Continuing with his mesmerizing oration, Mr. Sait gave some thoughtful insights. He observed that the division ofMemons in the name of tradition and culture had
weakened the collective power of the community and WMO was keen to unite and connect each and every Memon from across the globe, irrespective of them being Halai, Kutchi or Kharadi. Now it was time for Mr. Adil Azeez (Assistant Vice President of WMO-SIC) to take the floor. In his brief address he put the spotlight firmly on the prime objective of WMO – to Uplift the Memon Community.

“The World Memon Organisation firmly believes that if you give a man a fish, you feed him for a day ; teach a man to fish and you feed him for a lifetime. Empowerment of men and women belonging to the marginalised sections of society has been one of the most essential humanitarian services provided by WMO. Over the years, hundreds of auto rickshaws and thousands of sewing machines have been distributed to enable families to earn a livelihood, provide their children with an education and ensure a life of dignity. Along the same lines, WMO South India Chapter has rolled out the micro finance program whereby loans will be given to suitable candidates from the Bengaluru Memon community to procure vehicles. Sewing machines would also be donated
to deserving women under the program,” stated Adil Azeez.

He hoped that the hands that were outstretched for Zakat would soon turn around and give Zakat. That would be the ultimate goal of these initiatives which were rolled out in Bengaluru. Adil praised WMO North India Chapter too for providing jobs to thousands of deserving youngsters by hosting job fairs at regular intervals across the country. A WMO Membership card was formally launched soon after.

Finally, Mr. Haroon Kareem walked to the podium and congratulated WMO-SIC for hosting a wonderful event and gave a detailed account of the organization since it’s inception in 2002. He elaborated on the extensive humanitarian services provided by the organization including humanitarian aid, education, housing and empowerment to uplift the community in all corners of the World. Since 2002, 60 million dollars had been contributed towards the many worthy causes undertaken by the organization and he concluded by thanking all WMO members who worked relentlessly under its banner for the betterment of Humanity.