The Camps of Balukhali 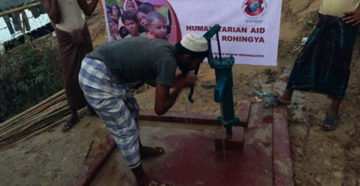 The smoke still billows above a burning village in Myanmar’s Rakhine state, across the border. I sit in the Refugee Camp of Balukhali, a small Bangladeshi town on the Myanmar border and witness hell on both sides. The fires of the netherworld and the shades of purgatory, paint a grim canvas for “the most persecuted minority in the World” – the Rohingya.

Extreme atrocities against women and children, wiping out of entire villages by Myanmar forces have triggered the mass exodus of villagers to Bangladesh. Over half a million have crossed the border in just a couple of months. The surge of refugees, many wounded or ailing, has strained the resources of aid agencies and communities that are already helping hundreds of thousands displaced by previous waves of violence in Myanmar. Many have no shelter and aid agencies are racing against time to provide clean water, sanitation and food.

World Memon Organisation stands firm, shoulder to shoulder with the Rohingya community during these uncertain times.

The WMO Far East Chapter team, are assessing the grim situation at the camps. Funds have been pouring in from across the globe for the Rohingya community and the organisation must ensure that they are utilised to make a tangible difference on the ground ; to alleviate the pain and ease the hardships endured by the refugees, dwelling in the subhuman conditions of the uninhabitable Balukhali camps.

We are surrounded by slopes of hills covered with orange and grey tarpaulin sheets, for as far as the eye can see. Thousands of makeshift shelters have mushroomed over 2000 acres of land, housing more than a hundred thousand migrants. Plastic sheets wrapped around bamboo sticks with tarpaulin roofs are the new homes of the Rohingya refugees. At least 6 to 8 adults are stacked together in these shacks accompanied with their children ; all confined in an area of just 5 feet by 10 feet. The rains continue to play havoc with frequent landslides, wiping out homes and creating large pools of mud, in and around the shanties. The afternoons bring the scorching heat and the only sight of relief is a rainbow that sometimes appears on the horizon when the wet spells follow the afternoon sun.

There are hardly any toilets and the occasional breeze carries the stench of human faeces, unwashed skin, stale food and death. Many refugees have succumbed to the hardships and their shrouds gather dust. There is an impending epidemic looming as the squalid conditions worsen due to lack of sanitation, as the rapid influx of refugees from Myanmar refuses to cede.

Food is scarce as is clean drinking water. Malnourished kids with vacant eyes queue up for food in serpentine lines that stretch the length of two football fields. Many have horrific tales to tell of the persecution they faced in Myanmar and the arduous journey they embarked on to reach the camp. Crossing mile wide, raging rivers in wobbly wooden containers that kept them afloat, walking days on end in knee deep mud, across paddy fields to escape rape, torture and slaughter. Every child has lost at least one or several members of their family.

I was soon surrounded by a group of children, baked in mud as they trudged through the scattered puddles to reach me. I was distributing a few goodies that I had carried in my pocket since Chittagong. The motley group were pleased as punch; they had just won a prize- a pot of cooked rice. The odd games that people invent in difficult situations to weather the storm. As the tiny tots offered to share their prized possession with me, a morsel of rice, my eyes brimmed with tears. I thought about my own children, as a father I wanted my kids to lead an accomplished life, have the best in education, fulfil their ambitions, pursue their passions in life, be it sports or a hobby. And here I was with children, possibly orphaned whose only aim was to survive the night. As they firmly held onto their prize, a fistful of rice that would enable them to achieve their tall ambition of staying alive, through yet another day of their eventful life.

LOCATION
Camp Aman is situated between Balukhali and Kutupalong Refugee Camps in the Ukhia Sub-district of Cox’s Bazar, along the Bangladesh – Myanmar border.

A couple of humanitarians from UK – Mr. Amir Farooq and Mr. Adil Abbasi are collaborating with WMO on the Aman project. They are the business partners of Mr. Bashir Sattar (Founding Trustee of WMO).

Funds have been pouring in from around the World for this pertinent cause but much more is needed. As we distribute food packs to the gathered children, queuing up to collect their weekly food ration, some are rummaging through the relief goods containers filled with the usual – flashlights, soaps, candles, utensils, terpal sheets, floor mats, brooms and clothes. The new arrivals are shoes, blankets for the oncoming winter, carpets for the Masjids and a few elementary picture books for kids. As the construction work is underway for the school and masjid in the distance, its heartening to see a few children pounce on the books, rather than the preferred colourful T-shirts.

Another day has passed and as the sun sets over the Balukhali camp, the faithfuls congregate to offer their Magribh prayers. We lay out the carpets and join the others to perform Salaah. The Imaam recites Surah Al-Inshirah. His melodious voice fills the air and I recall the translation of those insightful verses, which under the prevailing difficult conditions are most befitting –

Wa-ila rabbika fairghab
And to your Lord (Alone) turn (all your intentions and hopes and) your invocations.

My heart is at peace.

A wry smile escapes my lips. Who would have thought that we would find peace in this part of the World – filled with torment, sorrow and eternal suffering but the Lord works in mysterious ways. But then again, we did name our Project – ‘Aman’ which translates in the language of the Rohingya to ‘Safety, Comfort and Peace’

We hope and pray that the Almighty bring an end to the violence, hatred and discord. Help us accomplish the goals, we set out to achieve. Grant us Peace which is True, Perfect and Everlasting.