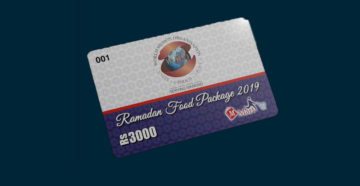 Trust Mr. Mahmood Shaikhani (Deputy Secretary General of WMO) to think out of the box and come out with an initiative which not only aligns with the bountiful spirit of giving during the holy month of Ramadan but truly maintains the dignity of the receiver as well.

As a norm, several WMO Chapters across the globe deliver hundreds of food packs to underprivileged families in their corner of the World at the advent of Ramadan. During the Month of Fasting we would like to ease the burden on our Muslim brothers and sisters hence we are doing our bit to bring food on their table.

The common ritual followed until last year was announcing a date and venue for the distribution of the Ramadan Ration Bags wherein the underprivileged would arrive, wait in long queues, jostle about under the hot sun for a food pack which would have a fixed quantity of essential items.

With Mr. Mahmood Shaikhani’s invention of the Ramadan Ration Card, the receiver has the privilege to go up to a general store which the organisation has collaborated with. Buy food items of his or her choice, at a time of his or her choosing and make purchases on the card; quantities in accordance with the needs of their families. Your very own credit card whose dues are already paid off by WMO.

More importantly it saves the person the humiliation of standing in line for a meagre bag and exposing oneself as a Zakat receiver.

WMO firmly believes in dignity of life hence most of the global humanitarian endeavours are centred around education and empowerment to enable less fortunate individuals to stand on their feet and ensure a better life for their families. Mr. Mahmood Shaikhani has just taken another big step in achieving that paramount objective.