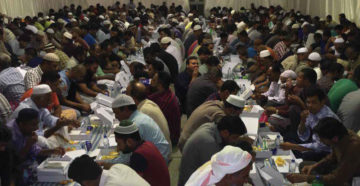 WMO Middle East Chapter epitomises the values of Giving – the same values to which the United Arab Emirates had dedicated the Year 2017 – the “Year of Giving”.

In the Ramadan of 2015, the World Memon Organisation, Middle East Chapter served Iftar meals for the entire duration of the holy month. An Iftar camp was set up in Dubai and 37,500 Muslim brothers were provided meals for 30 days as they gathered together, under one roof to break their fast.

These brothers were mostly poor migrant workers employed in the bustling Middle East construction industry. They toil laboriously throughout the day, without food and water, building skyscrapers that will soon adorn the Dubai skyline whilst religiously fasting under the hot desert sun.

Since then the Ramadan Iftar Camp has become an annual feature on the WMO Middle East Chapter Calendar. In the year 2016 two camps were set up at Sonapur and Dubai Investment Park. 60,000 meals were distributed during the 30 day tenure.

Mr Mahmood Shaikhani, stalwart of WMO Middle East Chapter has pioneered the project, along with other distinguished members of the local chapter who have provided unflinching support to this commendable campaign. Mr. Shaikhani took this cause one step further by setting up another camp – the third in Ajmaan in 2017. Over 75 thousand meals were served in 2017. Alhamdulillah.

In 2018, the same feat was repeated and in 2019 we breached the 100,000 mark. There were record crowds with a daily consumption of more than 2500 meals at each of the 3 Iftar Camps in Sonapur, Dubai Investment Park and Ajman. Mr. Salman Iqbal of ARY fame has made a welcome addition to this admirable campaign by hosting iftar meals for more than 500 brothers at 2 separate mosques in the Al Barsha region of Dubai.

Mr Shakir Haroon, son of the illustrious Haroon Karim (Chairman of WMO Board of Trustees) has spread the cheer across the border by establishing an Iftar Camp in the Al Khoudh region of Muscat in Oman.

We implore you to delve deep into the bountiful spirit of giving and brotherhood during the blessed month, contribute towards the worthy cause of the Ramadan Iftar Camps and join us on the Arabian coast as we unite to break bread with our brethren in the Middle East.