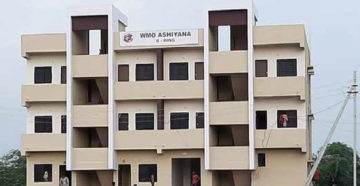 On the 16th of September, 31 underprivileged families of the Memon community moved into their very own homes in Akola. As the first Legacy project of India stood completed Ashiyaana welcomed the 31 families into her fold. Each appartment was a spacious 2 bedroom, hall and kitchen structure spread over two housing wings with all interior work completed including bathroom and electrical fittings.

The inaugural ceremony was attended by several WMO luminaries from India, Sri Lanka and the UK. Mr. Haroon Karim (Chairman of WMO Board of Trustees) inaugurated the premises, along with Mrs Naseem Majid Ranani and handed over the keys to the deserving families. The occasion was peppered with joyous scenes and tears as the eyes of several family members welled up as they became proud home owners on the memorable day.

The word ‘Ashiyaana’ means a nest. A most enduring legacy – a roof over the heads of marginalized families of the Memon Community – a nest for all to come home to.