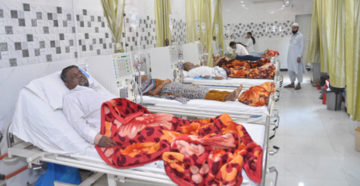 Khidmat Charitable Trust is located in a serene park, one of the few remaining green lungs of Mumbai city. It is a non-profit organisation which was set up in 2001 to provide effective medical and health care to the underprivileged across India.

From free medicines to diagnostic tests, from providing kidney dialysis to a sizeable number of afflicted brothers and sisters on a daily basis at zero costs to making life saving surgeries possible for the less fortunate. Everything is being taken care of, under one roof and in record time.

The Trust’s head office consists of a waiting area which has a constant stream of visitors suffering from various ailments. There is a dedicated department for dialysis treatment, 2 large rooms housing eight beds each with separate sections for men and women. A few committed doctors and nurses are always on hand to monitor the treatment. The soulful rendition of Surah’s from the Holy Quran plays in the backdrop, reinforcing that this work is purely for the sake of pleasing Allah S.W.T.

Hamid Nathani, former VP of WMO India Chapter is a lofty pillar of strength of the Khidmat Trust. Other stalwarts including his brother Rashid Nathani, Mr. Shabbir Patca (Regional Secretary General of WMO North India Chapter) and several other prominent philanthropists of Mumbai city, make up the core team of the Trust.

Khidmat means “To Serve” and the World Memon Organisation has firmly underlined “Serving Mankind” on their logo. With both organisations sharing the same ideology, it was only inevitable for their paths to align in their endeavours to uplift Humanity.

WMO will continue to collaborate with organisations such as Khidmat Charitable Trust in various countries across the globe to achieve their vision for the year 2030, whereby no child will be deprived of an education, all families will have a roof over their heads and effective medical & health care will remain firmly within the frail grasp of penury.