by World Memon Organisation on 20 August 2016 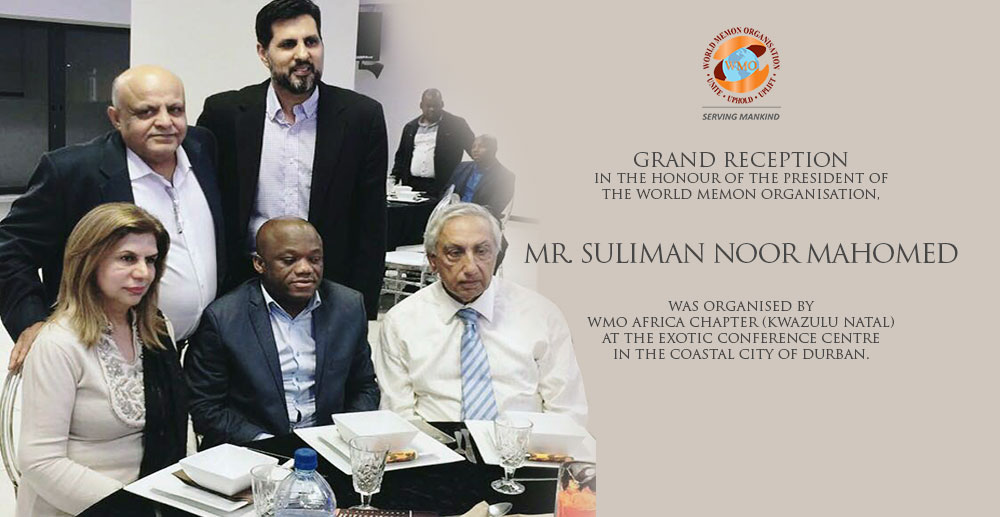 On the 19th of August, a grand reception in the honour of the President of the World Memon Organisation, Mr. Suliman Noor Mahomed was organised by WMO Africa Chapter (Kwazulu Natal) at the Exotic Conference Centre in the coastal city of Durban.

Mr Solly Suleman did the inauguratory honours followed by Yunus Suleman who discoursed upon the various humanitarian projects undertaken up by WMO and elaborated on the international youth activities conducted in the different chapters of WMO. The inspiring oration was ensued by the President of WMO, Mr. Solly Noor who thanked the hosts for their commendable efforts in organising a remarkable event and urged the gathering to attend the upcoming WMO AGM in Dubai. A number of guest speakers spoke on various topics ranging from Standard Bank’s shariah offering, Albaraka Sukuk, innovative models of NGO sustainability, political and business opportunities of partnering with WMO as a global Organisation. This was followed by a lavish dinner.

The audience gave a big thumbs up to the spirited and focused approach of WMO that has prioritised to rekindle the passion and vision of its founding fathers, combined with the mission of the current Exco to unite, uphold and uplift Mankind.