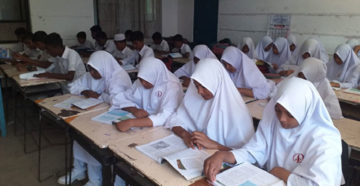 The World Memon Organisation firmly believes that your Alma Mater plays a vital role in shaping you into the Person you become in Life. Your teachers impart the important lessons for life, you are introduced to your life long friends, you get a taste of your favourite sporting activity, you realise if you are inclined towards theatre and can become the next George Clooney or you are enticed by technology to become the next Bill Gates.

The year was 1916 when Mr. M.A.C.Mohamed inaugurated the school. It was named and based on the Denham English School with just three teachers and 8 children.

As the years passed by and the number of students increased, the school was conducted over 2 sessions. The institution grew in prominence as the students excelled in education, sports and other extra-curricular activities.

Unfortunately by 1933 there was no one to look after or maintain the school. The government stepped in, renamed it Dharussalaam Maha Vidyalaya and changed the medium of instruction from English to Sinhalese and Tamil.

However with time and a multitude of reasons, including the parents’ lack of interest, local issues and bad administration, the standard of education and discipline dropped. The government was unable to provide a new building and classes were conducted in a temporary shed.

In 2012 the Past-Pupils Association was formed and they collaborated with the Serendib Schools Development Foundation (SSDF) to improve the precipitously deteriorating condition of the school. A blue print was designed for the development of education and infra-structure for the school

On the initiative of Mr Majid Ali Mohamed of Eurochairty, the World Memon Organization arrived on the scene in 2013. Together, they organised extra-classes in core-subjects, sports activities and even conducted a breakfast programme for 140 needy children. They also provided the bulk of the funds for the construction of a new three-storey building to house class rooms.

On the 25th of January 2016, the foundation stone laying ceremony of the new wing was graced by his Excellency, the President of Sri Lanka, Mr. Maithripala Sirisena. Accompanying him were WMO trustees Mr M.H. Omar, Mr Eliyas Kareem and all prominent members of the WMO Far East Chapter.

Fittingly the theme for the centennial year is “Uplifting Lives through Education”. Working on this firm belief, the World Memon Organisation has contributed millions of dollars for over a decade towards educating thousands of students across the globe.