An Admirable Cause undertaken by WMO Africa Chapter Youth Wing 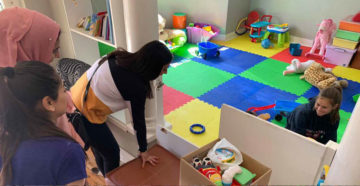 After a month long exhaustive collection drive which elicited an overwhelming response from our generous donors, we were sitting on a pile of clothes, toys and shoes. On Sunday – the 25th of August, WMO Africa Chapter Youth Wing embarked on their distribution journey, after earmarking two deserving shelters.

We began at El Shammah Home for Abandoned Babies. The home was established 12 years ago by a couple, whom after a period of two years handed over the responsibilities to the current owner who has been running it since. Situated in Primrose, Germiston, the home currently employs 9 people, including 3 caregivers and is a safe haven for 8 babies, ranging from 4 months to 18 months. They look after abandoned toddlers until the age of 3 and thereafter if the child has yet not been adopted, the social worker assigned to the child’s case finds a new placement at another orphanage for elder children. The home has a formidable 95 percent successful adoption rate. We provided them with clothing and toys.

The next stop was Madressah Tul Banaat, the foundation located in Nigel exudes an extremely warm vibe. It started with an elderly Muslim couple from Benoni taking in orphaned young girls and thereafter expanding to accommodate the elderly, the abandoned as well as vulnerable women and children. The residents of the home have swelled to 110 Muslims of all ages and gender. The foundation is currently located on a farm which was admirably donated to the couple by a benevolent family. The children are allowed the opportunity to attend school with two of the resident teenagers already in university ; the shelter provides all children with transport to and from the institute. Relying mainly on donations, the Heidelberg community works hand in hand with them and the foundation has never turned down anyone who comes knocking on their door, seeking refuge. WMO provided them with clothing and shoes for all age groups.

Both orphanages and shelters were exceptionally hospitable and we found the atmosphere extremely conducive for the wellbeing of the residents. The caregivers were well-cultured, well-mannered and dedicated to the cause.

The Youth Wing looks forward to assisting them and other organizations in the near future that align with the objectives of WMO – to “Serve Mankind”.