previous
An Admirable Cause undertaken by WMO Africa Chapter Youth Wing
random
next
Spreading the Light with Gift of Sight.
0 comments 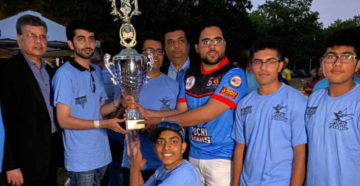 The North American Chapter of the World Memon Organisation (WMO) has been an avid supporter of the Memon Premier League (MPL) which was initiated by the Memon Association of North America (MANA). MANA is based in New York and covers the states of New York, New Jersey and Connecticut with an extensive presence in Northeastern USA.

In 2013, the MPL after having taken various countries by storm knocked on the doors of New York via Fawad Lakhani and his brothers. Having played cricket at a professional level in New York, Fawad approached the President of MANA, Mr. Zulfikhar Memon to form the MPL. This idea was applauded and MANA agreed to launch MPL along the same lines and format as the Indian Premier League (IPL).

Held under the auspices of MANA, the MPL now raises a significant amount in sponsorships each year which is used to cover the costs of the players’ kits, ground reservations, umpires, professional video coverage, food, trophies while the surplus amount is used for supporting other humanitarian causes.

The MPL has been witnessing remarkable growth in North America since its inception and the credit goes to the stalwarts of MANA – Mr. Amin Pochi, along with its founding members namely; Iqbal Mojawala, Salim Bandukra and Omar Karim.

Mr. Omar Karim, founder and former President of MANA is the current MANA representative to WMO North America Chapter. This distinguished WMO NA RMC member had introduced the MPL to WMO
in 2017 when a delegation of WMO comprising of Mohammed Bashir Akuly, Ghaffar Variend and Qasim Lawai met him in New York in 2017. The gentlemen came to an agreement and WMO-NA became one of the main sponsors of MPL . In 2019, WMO NA went one step further and bagged the platinum sponsorship for MPL.

By following the message of unity through sports the WMO North America Chapter has taken the step in the right direction.

Under the able patronage of youngsters like Fawad, the MPL is now providing a platform to the memon youth where it is not only teaching the youth sportsmanship skills but also leadership skills under the umbrella of MPL.

This year’s MPL final was clubbed together with a Memon Family Picnic and this two day event was held on September 21 & 22, 2019, where about a 100 memon families from all across North America came together to cheer for their teams and then enjoyed the great outdoors at a family picnic post the MPL final. The final ended with Pochi stars lifting the coveted trophy.

The final was graced with the presence of Amin Pochi, President of MANA, Suhel Milwala, secy- MANA, Azeem Aibani, treasurer, Honorable Thomas Kevin, New York State Senator, Mohamed Bashir Akuly, President WMO North America, Jawed Khandwala, President of Chicago Memon Jamat, Iqbal Mojawala, Yasmin Mojawala, Salim Bandukra, Zulfikhar Memon and Omar Karim making this event a colossal success. The WMO North America Chapter has vowed that they shall follow up with many more sporting events in the coming months to unite not only the Memon community but people from all corners of the world who have migrated to this great nation and now call it home.

It is indeed true that sports does have the power to inspire, to unite and could perhaps even change the World. Take a bow, Mr. Mandela.